The Restoration of the Christ Episcopal Church Cemetery

in Stratford, Ct,
the Resting Place of Our Founding Father William Samuel Johnson 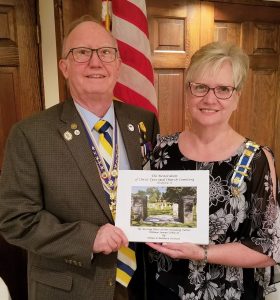 Barbara is a member and the current Regent of Freelove Baldwin Stow Chapter in Milford, Connecticut. Barbara is also chairperson for the Wreaths Across America Ceremony that is held at Kings Highway Cemetery in Milford every December.

Their Societies are non-profit organizations. The objects of their Societies is to perpetuate the memory and the spirit of the men and woman who achieved American Independence; to promote the development of an enlightened public opinion; and to foster patriotic citizenship and the preservation of our history.

The cemetery includes their Founding Father William Samuel Johnson, 20 Revolutionary Patriots, one Privateer and nine Patriots from the War of 1812. 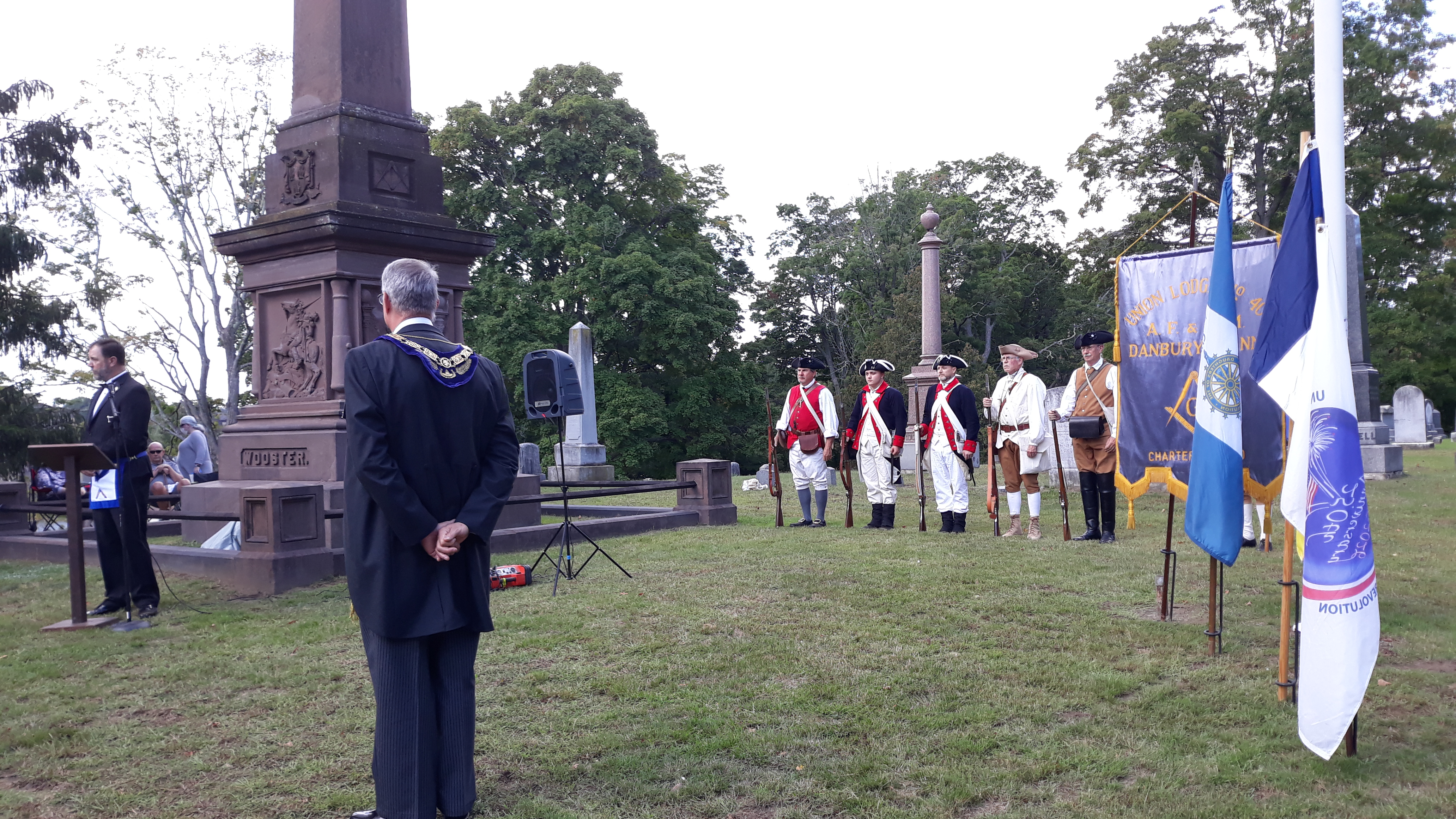 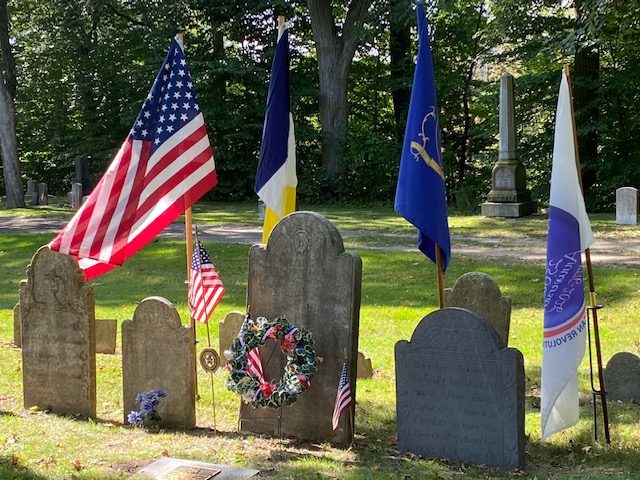 Both Patriots Died in Service to their Country

“Pilot of the Turtle” 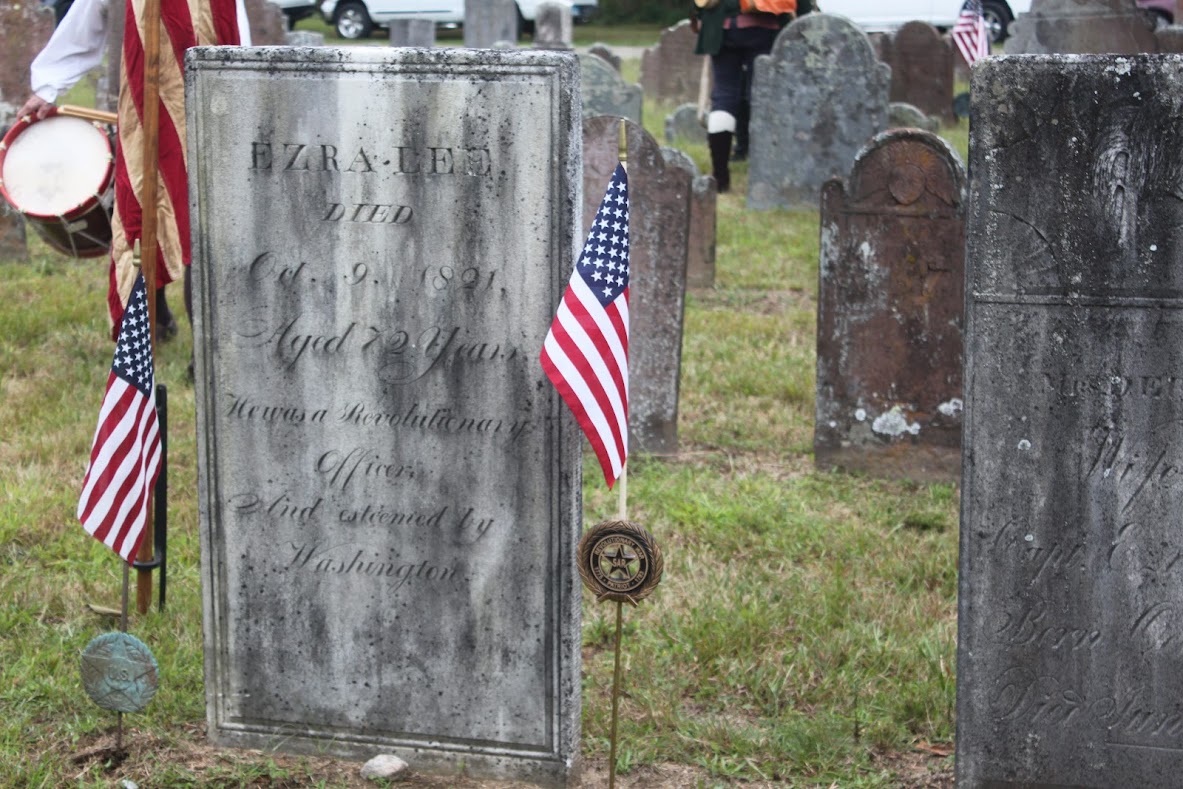 On Sunday September 5, State President Stephen Taylor led the Connecticut Line and members of the Capt. Nathan Hale Branch No. 6 in a grave marking of patriot Ezra Lee. Who was the pilot of the “Turtle” which launched the first attack by a submersible on a British warship in New York Harbor.  Following the grave marking, New member James Harrington with family members present was sworn in as a member of the SAR and Branch  No. 6.  In addition, Young Marine Sgt. Ryan Spring was presented with the Bronze Good Citizenship Medal with Ribbon Bar for his performance as a Young Marine in the Brass City unit. 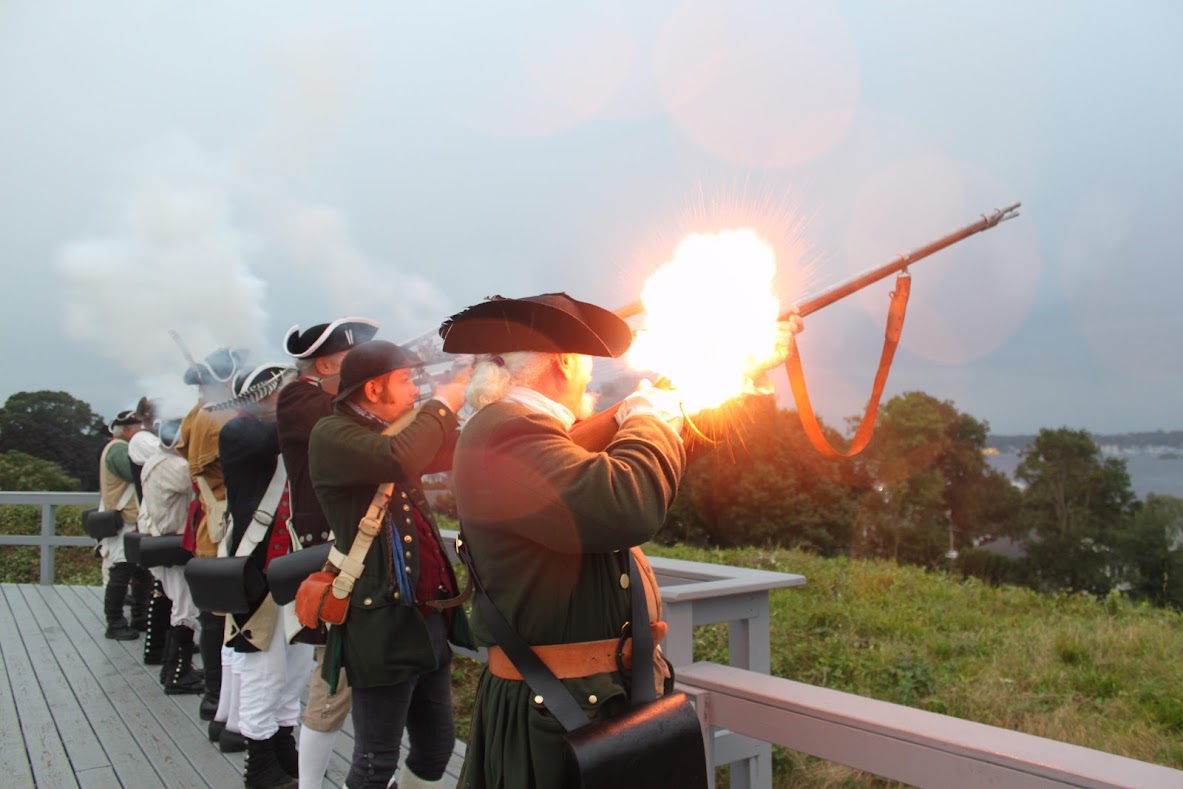 Later that day the Connecticut Line along with other members of the CT SAR participated in a grave marking of 4 patriots at the Col. Ledyard Cemetery in Groton.  After the grave marking the final event of the day was 240th Anniversary of the Battle of Groton Heights which concludes with a 3-volley musket salute from the raised platform overlooking the Thames River.

On Saturday June 19 in Trumbull, the General David Humphreys Branch No. 1 gathered to carry out a Patriot Grave Marking Ceremony to recognize and honor five Revolutionary War Patriots who are buried at Riverside Cemetery. One of the patriots, Nero Hawley, helped to establish this burial ground in 1807, and the historic cemetery is now part of The Freedom Trail. Nero, an African American slave, served during the war, including at Valley Forge. Also honored were three brothers who served: Captain David Nichols, Nathan Nichols, Jr., and James Nichols. Lastly, we honored Sargent Lewis J. Burton. More than 50 people gathered for the event including members of the Nero Hawley family.

246th Anniversary of the Battle of Bunker Hill 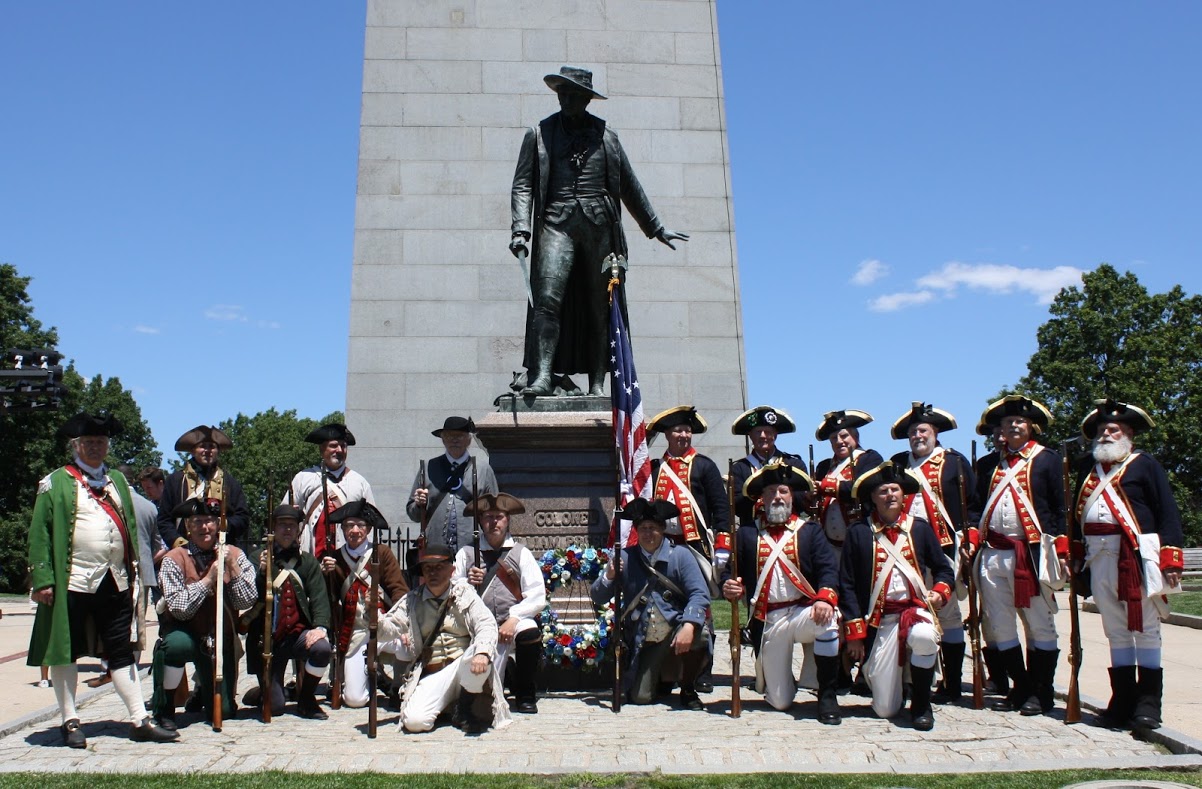 June 17th – The 246th Anniversary of the Battle of Bunker Hill was represented with 9 members of the Connecticut Line.  Colonel Dave Perkins, 1st Sgt Dan Dudley, Derek Brockhoff, Fred Rivard, Todd Unkefer, Dennis Walsh – NH, Paul Ford – NH, Russell Cumbee – NH and Richard Wright – NH
.
VPG Elect Bob Walsh was also in attendance.
.
Following the memorial service at St. Francis de Salas, we participated with members of the Massachusetts SAR Color Guard in a parade to and ceremonies at the Bunker Hill Monument Park acknowledging the Battle of Bunker Hill (Breed’s Hill) during the early stages of the American Revolution. Following the usual speakers and music as in years past we gave a 3 volley musket salute under command of Chris Tourtellot, MASSAR Color Guard Commander.
.
History nearly repeats itself!!!
.
As in 1775, a lack of black powder nearly caused a problem once again as NPS did not have enough rolled cartridges due to not ordering powder in advance. NPS did allow us to retrieve our own cartridges if we had any, but only if it was 2F grade.  Present it to them for inspection and collection for distribution. At the end there was only 1 extra cartridge not given out by NPS.
.
Below you will find a link that will take you to a slideshow of photos from this event. Photos courtesy of Lydia Cumbee
Bunker Hill Day 2021
——————————————————————————————————————————— 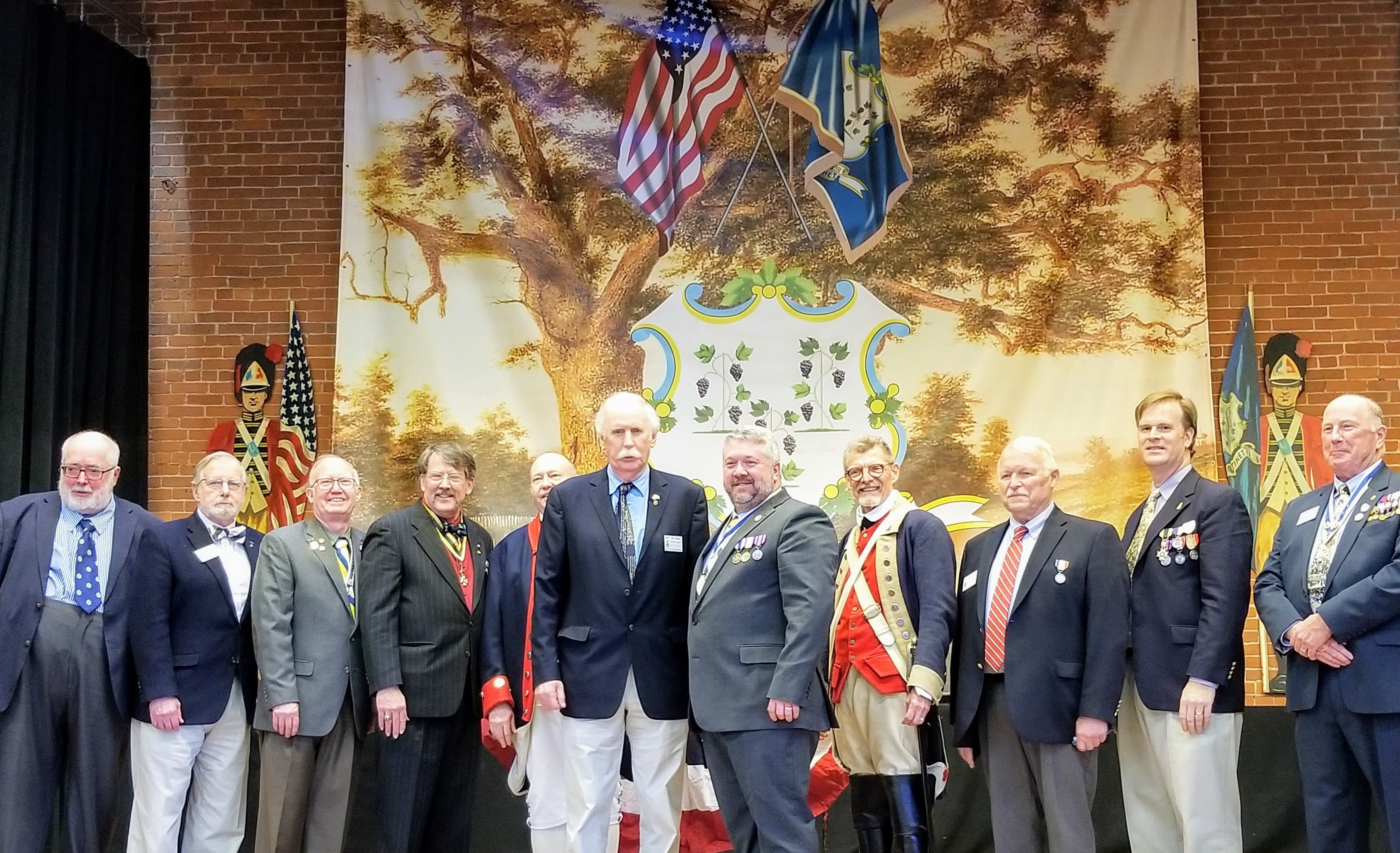 On Saturday, Stephen Z. Taylor was sworn in has the newest state president of the Connecticut SAR. President-General John T. “Jack” Manning and his lovely wife Shelia were our guests.  PG Manning gave the oath of office to all new state officers present. Outgoing State Secretary Paul Selnau was awarded the Patriot medal by outgoing State President Damien Cregeau.  Compatriot Cregeau was elected to fill the open position of State Secretary and received the Meritorious Service medal for his 3-years as State President.

Following the business meeting, elections and luncheon. Youth award recipients for Knight Essay, Eagle Scout, JROTC and our newest youth contest, Rumbaugh Orations were presented with their medals, certificates and monetary awards following the reading of their essays or orations speech.

Special thanks goes out to the 1st Company Governor’s Footguard for the use of the Armory and to Compatriot & Footguard member Todd Unkefer who made these arrangements and also catered the event. 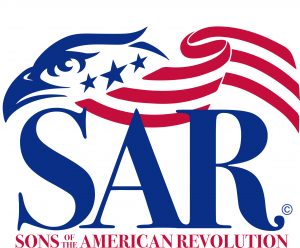 The Connecticut Society of the Sons of the American Revolution (SAR) is excited to announce that this contest is open to all high school students (9th through 12th grades) interested in the American Revolution. The contest is for all students attending public, parochial, private or home school students in that same grade range. The preliminary rounds of the contest begin at the local level, students may potentially advance to the state or national levels where scholarships and cash prizes are awarded.

Each student’s five-to-six-minute speech (and accompanying manuscript) will be judged based upon its composition, delivery, significance, and historical accuracy and relevance.

The Connecticut Society award for 1st Place is $500 cash and an Olympic-sized medal.

An informational flyer and the contest forms can be found at our national website link below.
Joseph S. Rumbaugh Historical Oration Contest – National Society Sons of the American Revolution (sar.org)

The state application deadline is March 31st, all judging will take place during April either in-person or virtually due to Covid concerns.  All interested applicants should reach out to the local SAR contact listed below for further details. 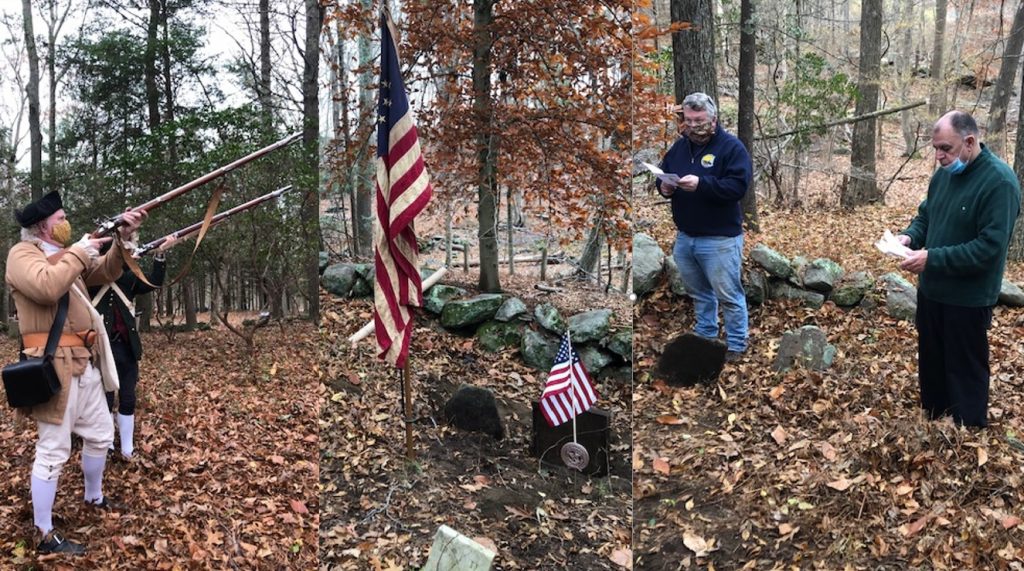 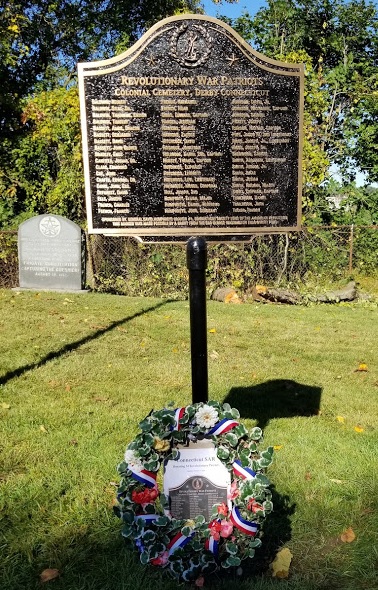 The program included a Posting of the Colors by the Connecticut Line.  Opening remarks were made by  Ethan Stewart, Sr. Branch President.  The CT-SAR 1st Vice President Stephen Taylor provided greetings from the State Society.  Although he could not attend, a Proclamation was read and received by the Mayor of Derby, CT Richard Dziekan.  Greetings from the DAR were given by Connecticut State Regent Christy Hendrie.

To read the full article and see photos, please click on the link below.

239th Anniversary of the Battle of Groton Heights

Following the grave marking, there was a shorter version of the usual ceremony inside Ft. Griswold.  In attendance at both events was New England District President Bob Walsh of the NH-SAR.  After walking the grounds of the fort the ceremony commenced with the reading of the names of the 88 defenders who died.  Capt. Nathan Hale Branch President Stephen Taylor along with NED President Bob Walsh placed a wreath at the site of Col. Ledyard’s death inside the fort at the hands of the British officer who captured the fort following its surrender.  The ceremony ended with 3-volley salute from the raised platform on the south-east earthen wall facing the Thames River and New London.

On Sunday July 26 at Putnam State Park in Redding – Two Eagle Scouts were recognized for participating in the SAR Eagle Scout Contest this year. They were Stephen Zigmond of Troop 15 in Redding and Spencer Carlson of Troop 76 in Ridgefield.  In addition, Steve Leavy of South Salem was sworn-in as a new member of the SAR in the Rev. Baldwin Branch No. 9 and presented with his membership rosette. 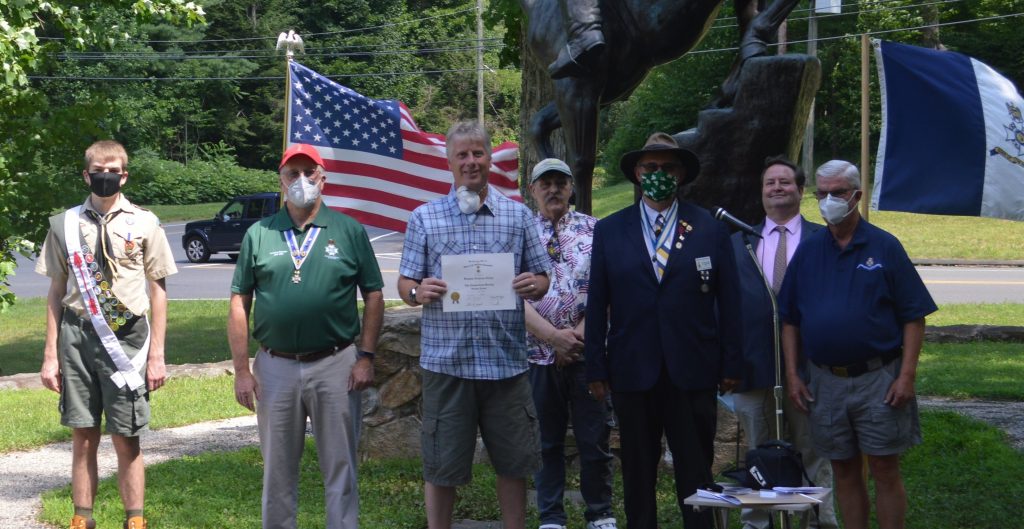 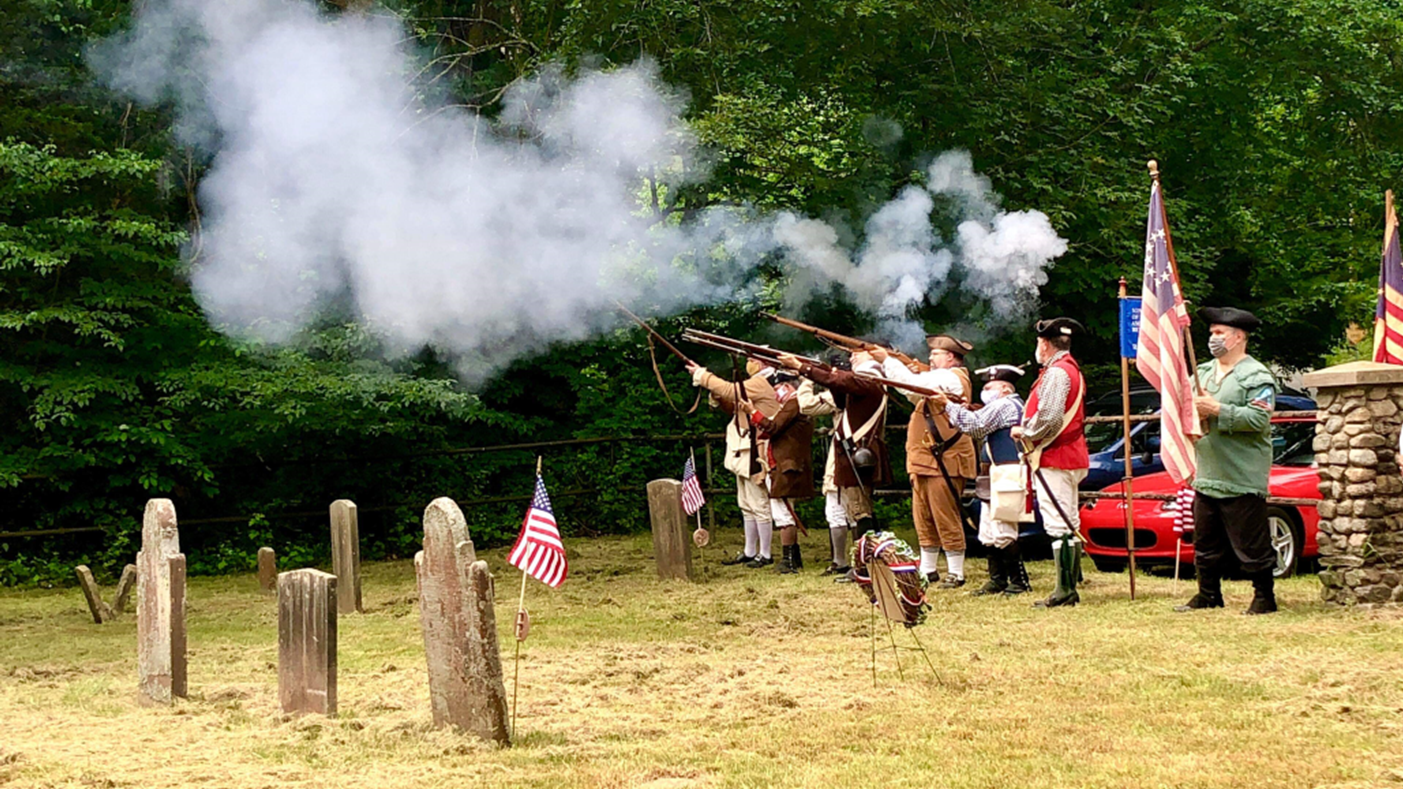 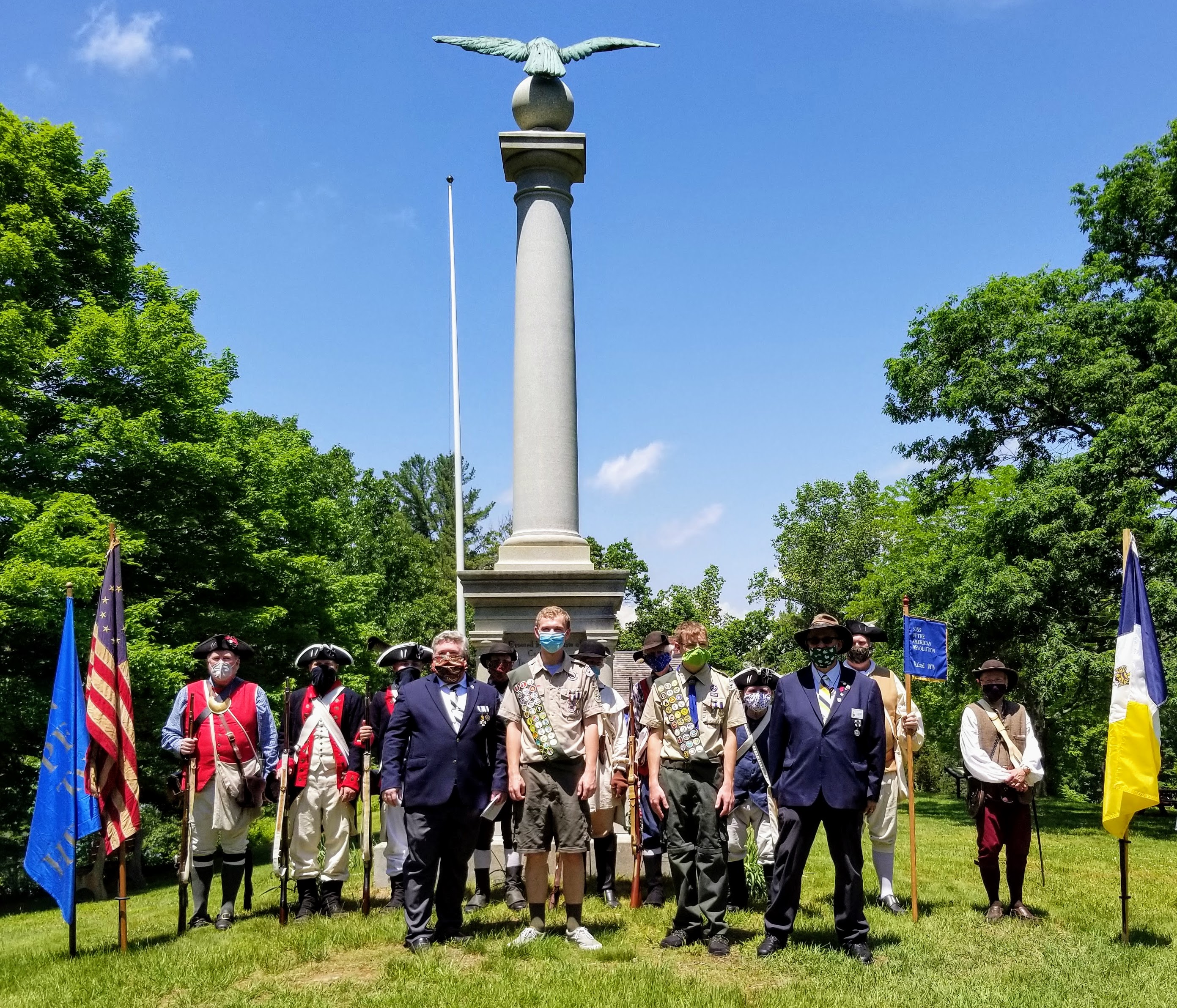 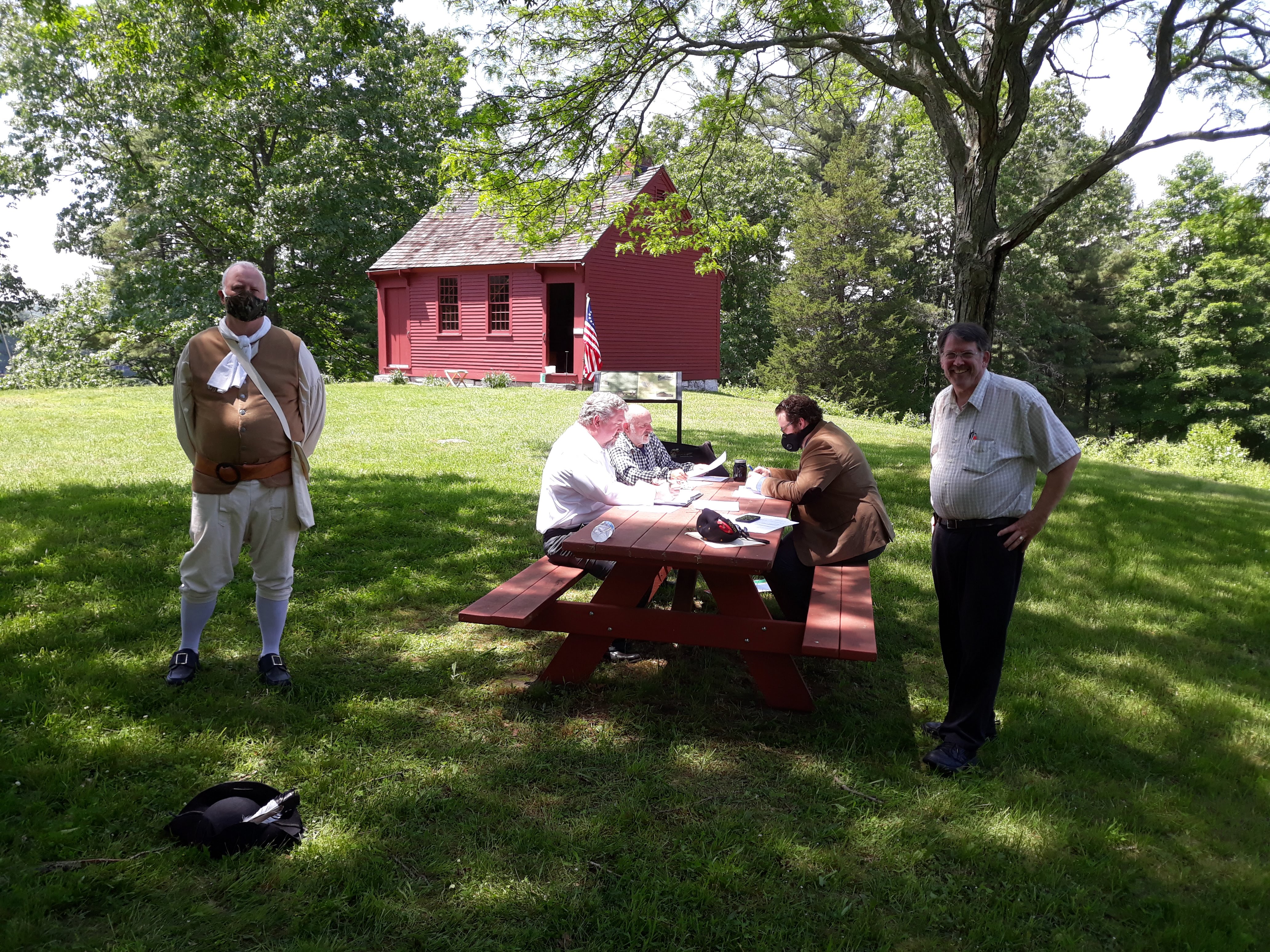 Following the ceremonies, the committee met to review plans for 2020 outside the schoolhouse under one of white oaks.  L to R: Jim Rothgeb, Stephen Taylor, Real Property Steward Dave Packard, Josh Taylor, and in coming State Treasurer Ted Nelson.