The Connecticut SAR has local groups all over the state, involved in a wide variety of activities. They range in size from about 15 members to over 100. The amount of activity depends on the group.

Connecticut is the only state SAR society that is allowed to call their local groups by the term “Branch”. We were the first state society to form a local group in New Haven, CT called the Humphreys Branch #1 only two years after the founding of the SAR in 1889. Since then most of our local groups have followed this tradition.

We have members in almost every corner of the state as you can see here.

Today Branch Number 1 is one of our more active Connecticut branches. With more than 75 members, the General David Humphreys Branch Number 1 meets at 6:30 pm on the second Monday of every month, September through June, in the New Haven area. Meetings include dinner, and usually a program relating to Revolutionary War history. For the past three years, the October meeting is held jointly with the 2nd Company, Governor’s Foot Guard, at their headquarters in the Goffe Street Armory in New Haven. In 1996, the 2nd Company Governor’s Horse Guard joined the October meeting for the first time.

A highlight of the year’s Branch activities is the 4th of July honoring of the Signers of the Declaration of Independence at Grove Street Cemetery in New Haven. Other activities include recognition of outstanding citizens, outstanding Law Enforcement Officers, Veterans, Eagle Scouts, ROTC participants, local Heroes, and the support of the precepts of the National and State Society efforts and programs. Naturally, Branch Number 1 recognizes the importance of having a good time, and each December and June meeting includes wives and families of members. 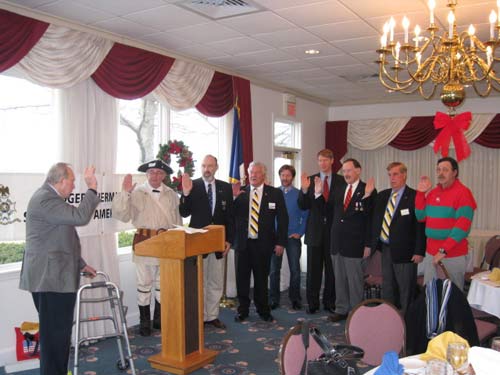 April 24, 2010
The Spring Meeting of the Jeremiah Wadsworth Branch Connecticut Society, Sons of the American Revolution will be held at J Timothy’s in Plainville, CT. 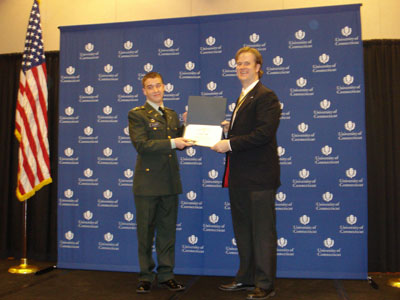 Wadsworth Branch President Damien Cregeau presented the SAR ROTC Award to Army ROTC Cadet Matthew Rogers on March 20, 2010 at ceremonies on the campus of the University of Connecticut in Storrs, CT. 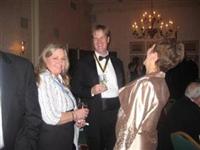 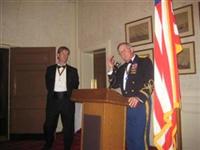 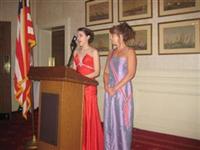 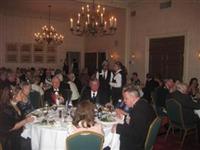 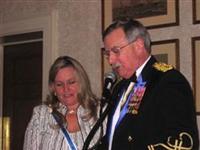 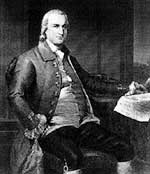 We hold monthly business/planning meetings on the first Monday of each month (with some exceptions), at the Montfort House at Lourdes in Litchfield at 7:00 PM.

The Gov. Oliver Wolcott, Sr. Branch #10 held its Annual Meeting & Luncheon on Saturday, May 2, 2015 at Marino’s Restaurant in Torrington. New officers were elected for the 2015-2016 term and a program was presented about Pvt. Joseph Plumb Martin.

Gen. Wolcott’s Sixth Militia Brigade Color Guard (the Color Guard of the Gov. Oliver Wolcott, Sr. Branch) participated in AMVETS Post 24 of Northwest CT’s 10th annual Red, White, and Blue Memorial Service. This year’s service was held at the Morris Congregational Church on Sunday, May 17, 2015. We posted the SAR flag at the beginning of the service and we fired a three-volley salute at the end of the service. The theme of this year’s service was the War of the American Revolution. The service focused on those soldiers from the Town of Litchfield, and in particular, the South Farms section of Litchfield which is now known as Morris. The focus centered around Capt. James Morris and his life and service to his fellow colonists, which provided a good sampling of the sacrifices that our forefathers made in obtaining our freedom. Other organizations that participated were: The Mary Floyd Tallmadge Chapter DAR from Litchfield; The 2nd Company Governor’s Foot Guard; The Marine Corps League #42 from Canaan; VFW Post 9086 from Torrington; Torrington Final Honors Squad; American Legion Post 38 from Torrington; American Legion Post 44 from Bantam; American Legion Post 173 from Morris.

Eleven of our members marched in the Memorial Day Parade in Litchfield on Monday, May 25, 2015.

The Mary Floyd Tallmadge Chapter of the Daughters of the American Revolution held a grave-marking ceremony at the East Street Cemetery (aka the Cartwright Burying Ground) on East Street in Sharon, CT on Saturday, May 30, 2015. The DAR asked us to join them in honoring Reuben Cartwright, a Revolutionary War patriot who is buried there and our Color Guard performed a three-volley musket salute.

Each year, on Independence Day, the Gov. Oliver Wolcott, Sr. Branch #10 takes part in a ceremony honoring two great patriots who are buried at East Cemetery in Litchfield. This event is hosted by the Mary Floyd Tallmadge Chapter DAR. The Charles Merriman Society of the Children of the American Revolution and the First Litchfield Artillery Regiment also participate in this ceremony. This ceremony begins at 12 NOON on July 4th.

We will be participating in the Independence Day Let Freedom Ring ceremony on the Green in Litchfield on July 4th. This ceremony immediately follows the ceremony in East Cemetery. Beginning in 2015, SAR Color Guard members will present each flag of the original 13 states at the same time that the First Litchfield Artillery Regiment fires cannon salutes to honor those states in the order that they ratified the Constitution of the United States of America. This ceremony ends with the ringing of the bells of the four churches near the Green. They ring 13 times in honor of the 13 original states at precisely 2:00 PM, and they ring simultaneously with the Liberty Bell and thousands of bells all across our great Nation.

We will be presenting a program about the American Revolution to children at the Litchfield Historical Society on Tuesday, August 4th.

We will set up our “Paul Everett Living History Encampment” on the lawn of the Hurd House at the Woodbury Colonial Fair & Muster from 12:00 NOON to 5:00 PM on Sunday, September 20, 2015.

We will be participating in the Wreaths Across America ceremony at the All Wars Memorial in Bantam, CT at 12:00 NOON on Saturday, December 12, 2015.

Each December we meet for our annual Christmas Social & Dinner at Marino’s Restaurant in Torrington. At this event, we usually celebrate with historic musical entertainment. Col. Benjamin Tallmadge was a senior intelligence officer under Gen.Washington and the leader of the Culper Spy Ring. Upon learning that Maj. John André had been arrested with a pass for getting through the American lines and a set of papers detailing West Point’s defenses hidden in his stocking, Tallmadge suspected Benedict Arnold to be André’s accomplice. Tallmadge’s actions led to the exposure of Benedict Arnold’s treason. Maj. John André was found guilty of being a spy and was sentenced to hang. 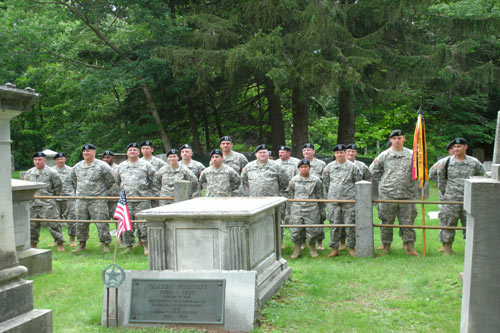 Buckbee also mentioned that he and Judey Sawyer had been cleaning the gravestones in the Wolcott and Tallmadge plots since April, so that they will look presentable for this year’s Independence Day ceremony. They removed most of the dirt, moss, mold, lichen and tree sap that have accumulated on them for so many years. Prior to the cleaning, the inscriptions on some of the graves were illegible. All of the inscription on the top of the tomb of Gov. Oliver Wolcott, Sr. was completely hidden under a black build-up.

Sawyer and Buckbee asked for permission from the Litchfield Cemetery Association before they began the project. Buckbee learned how to properly clean headstones through his involvement with the Connecticut Gravestone Network. They used nylon spatulas and brushes, along with a lot of water and elbow grease to clean the tombs and headstones. They do not use chemical cleaning agents of any kind, as that can do more harm than good.

Judey Sawyer is currently the vice-regent of the Mary Floyd Tallmadge Chapter of the Daughters of the American Revolution. 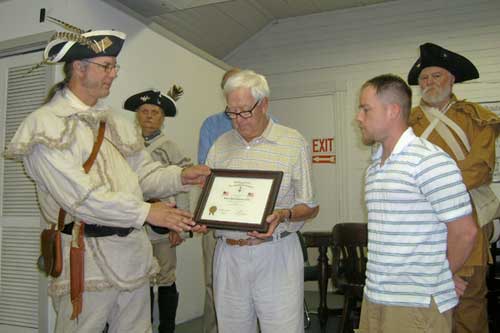 On June 18th, members of Gen. Wolcott’s Sixth Militia Brigade presented the SAR Flag Certificate to the Buck’s Hill Community Club in Waterbury. The club has been properly displaying the the Flag of the United States since it was founded in 1926. Buck’s Hill Community Club members work together to form a better, stronger, and cleaner neighborhood. They carry out various neighborhood projects, such as litter pick-up and landscaping along North Main Street and Buck’s Hill Road.

The picture shows Ken Buckbee presenting the SAR Flag Certificate to BHCC member Charlie Schmidt and BHCC President Jos R. Gagnon. Mr. Schmidt is one of the many members who volunteer to take one-week assignments to raise and lower the Flag. 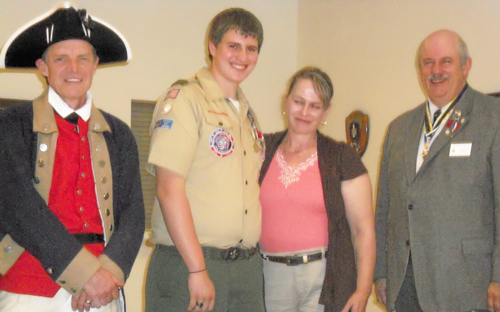 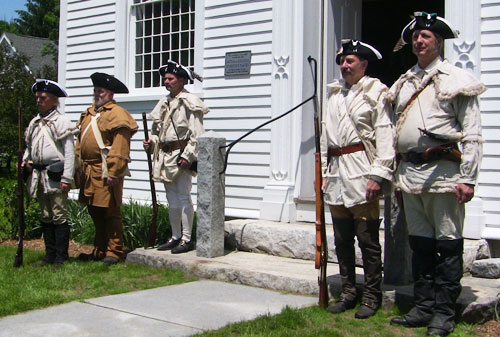 Joyce was a long-time friend of the Gov. Oliver Wolcott, Sr. Branch. She was a 69-year member of the Daughters of the American Revolution, and she was the regent of two different chapters; the Women of ’76 Chapter of Brooklyn, New York; and the Mary Floyd Tallmadge Chapter of Litchfield, Connecticut. Over the years she had enjoyed working at the national society and in various state and local positions. She was a chapter president and state president of the Colonial Dames XVII Century, and a life member of the National Society Magna Charta Dames and Barons. 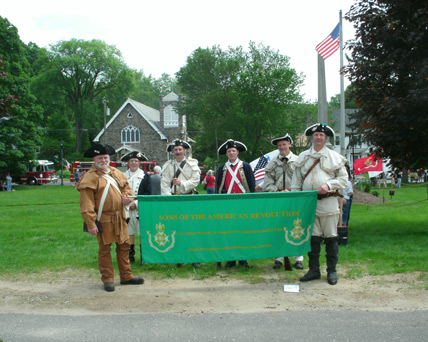 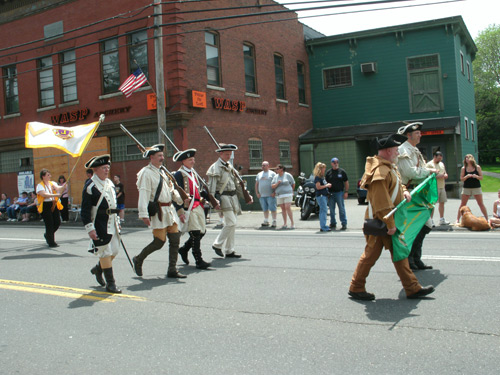 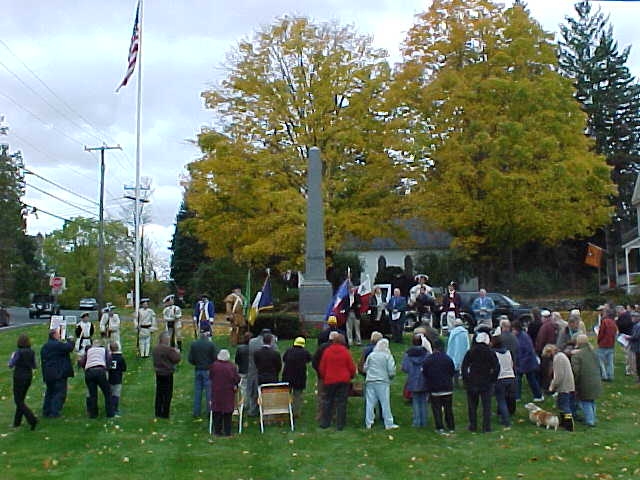 West Face:
Captor of Crown Point Commander of the Green Mountain Boys in the repulse of Carlton at Longueil and in the Battle of Hubbardton and the associate of Stark in the victory at Bennington

East Face:
Distinguished as a successful defender of the New Hampshire Grants and for Bravery Sagacity Energy and Humanity as a partisan officer in the War of the Revolution

South Face:
His remains are deposited under this monument erected by order of The General Assembly of Connecticut A.D. 1859