by A. Douglas Proctor 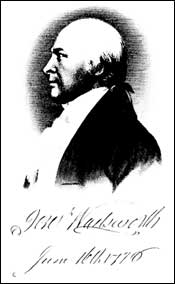 No one has yet written a best selling book about Col. Jeremiah Wadsworth, one of our great revolutionary war patriots. A new book about Benedict A. Arnold is popular right now. The fact that Wadsworth saw no reason why patriotism should interfere with profit could be a factor in why a book like this would not be a best seller today. Wadsworth became the wealthiest man in Connecticut at the end of the war. For anyone who has the ability to write such a book, there is an awful lot of resource material available. The Connecticut Historical Society has the following.

The Jeremiah Wadsworth Collection includes the main body of the correspondence, unbound and stored in boxes in chronological order, 1767-1894, and referred to in footnotes of the narrative as the “Wadsworth Correspondence.” Also includes two boxes of “French Army Papers,” one box of miscellaneous papers, one box of letter books, 1778-1783, three boxes of account books, one box of insurance accounts, or a total of thirty-two boxes of materials. In addition there are three notebooks containing maps and sales lists for the Genesee lands, one letter book of materials pertinent to the settlement of General Greene’s estate, a copy of Alexander Hamilton’s report on Mrs. Greene’s petition, a copy of the act of the North Carolina Assembly awarding land to Greene, a package of assorted papers dated 1800, a package of letters about continental supplies date 1775, a package of Hartford deeds, nine letter books, one diary (1778), a “Journal of Voyages,” two account books (1776-1780), and a cash book (1776-1777).

Jeremiah Wadsworth (July 12, 1743 – Apr. 30, 1804), Revolutionary soldier and congressman, was born in Hartford, Conn., the son of the Rev. Daniel Wadsworth, pastor of the First Church of Christ, and Abigail Talcott, the daughter of Gov. Joseph Talcott [q.v]. William Wadsworth, the first American ancestor of the family, came to America from England about 1632. Jeremiah was four years of age when his father died and he was placed in the charge of his uncle, Matthew Talcott, a ship-owner of Middletown. At the age of eighteen, in the hope of improving his health, he embarked as a common sailor aboard one of his uncle’s vessels, followed the sea for about ten years and rose to the rank of captain. On September 19, 1767, he was married to Mehitable Russell, the daughter of the Rev. William Russell, of Middletown; they had three children.

His early championship of colonial rights combined with his knowledge of mercantile affairs induced the legislature, in April 1775, to appoint him commissary to the Revolutionary forces raised in Connecticut. On June 18, 1777, the Continental Congress elected him deputy commissary-general of purchases, and he served until his resignation the following August. Upon the retirement of Joseph Trumbull [q.v] as commissary-general, he was appointed, in April 1778, to fill the post and remained until he resigned on December 4, 1779. Despite scarcity of funds and lack of cooperation on the part of state authorities, he kept the Continental Army so well provisioned that Washington wrote, “Since his appointment, our supplies of provision have been good and ample.” (W. C. Ford, The Writings of George Washington, VII, 1890, p. 141). At the request of Rochambeau, he served as commissary also to the French troops in America until the close of the war, and in the summer of 1783, he went to Paris in order to submit a report of his transactions. Proceeding to England and Ireland in March 1784, he invested the considerable balance remaining to his credit in merchandise that he disposed of profitably upon his return to America.

He avoided any appearance of arrogance. To his daughter, Catherine, he gave this advice: “…if you ever find you Selfe angry or ill-natured shut your selfe up for half an hour which will cure you–and keep you from repeating the fault.”

There was much in his personality to commend him to his generation. He was a striking figure. His piercing eyes and lined face, atop a tall and spare frame, commanded respect as “noble and agreeable.” Nathaniel Greene’s biographer has written: “Energy, activity, system and sound judgment…were Wadsworth’s business characteristics; cheerfulness, sympathy, and sincerity his recommendations as a friend.” In the correspondence he is “Jeri” and “Uncle Wadsie,” as well as “Col. Wadsworth” and “Jeremiah Wadsworth, Esq.” One reads there, too, the pledge of “the friendship, the partiality, and the affection of my whole family” received long ago from Byrd of Westover. He excited the admiration of a generation for his personal warmth and generosity. Wadsworth was anything but an undemonstrative man, becoming emotional, tender, and impassioned as occasion warranted. Through all his expressiveness ran a puckish wit which endeared him to everyone.

He was a member of the state convention called in 1788 to consider the ratification of the federal Constitution, and voted in its favor, possibly for financial as well as political reasons since he held public paper that was bound to appreciate in value upon adoption of a new frame of government. He was elected a Federalist to Congress in 1787 and 1788, but attended only in 1788. He was a strong advocate of assumption, a policy in which he appears to have had a large speculative interest (The Journal of William Maclay, new edition, 1927, pp. 174, 231, 323). In 1795, he was elected to the state legislature and to the executive council, remaining a member of the latter body by annual election until 1801.

His business interests were varied and important. He was a founder of the Bank of North America in Philadelphia and of the Hartford Bank, a director of the United States Bank, president of the Bank of New York, and one of the promoters of the Hartford Manufacturing Company, established in 1788, “the first purely wool-manufacturing concern founded on a strictly business basis, and the first in which power machinery was employed” (A. H. Cole, The American Wool Manufacture, 1926, I, 64). He established in 1794 the first partnership for insurance in Connecticut. He introduced fine breeds of cattle from abroad and engaged in experiments with a view to improving agriculture. Honorary degrees were awarded to him by Yale and Dartmouth colleges for his interest in the promotion of literary institutions. He died at Hartford and was laid to rest in the Ancient Burying Ground.

Jeremiah Wadsworth’s last years were years of rapid physical decline. He had been incapacitated by bad health from time to time throughout his lifetime.

Though virtually out of business and public affairs for the last decade, he remained physically active almost to the end. Humphreys reported him about six months before his death”…still so well, as to take exercise on horse-back,” but also “…declining, and …with rapid progression.”

In conclusion as we reflect on the lives of our great patriots, we cannot help but realize that money is the root of all virtue. For those who love to quote from the scriptures, how about Ecclesiastes, chapter 10, verse 19, “Money answereth all things.” From the King James version or from the Good News English version “Feasting make you happy and wine cheers you up, but you cannot have either without money.” I still say that someone someday will write a best seller about the life of Jeremiah Wadsworth, especially if we do not reduce our national deficit.