Our Color Guard today works much in the same way as the militia did during the Revolutionary War years. During the war there were militia groups spread out in all the towns and local communities across the state, ready to be called to action at any time. 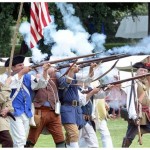 Today we rely on the Color Guards of our local Branches to act on the behalf of the state society.

Branches are encouraged to start their own groups. Some are working on just that today. Color Guards are one of the best ways for our society to promote revolutionary history.