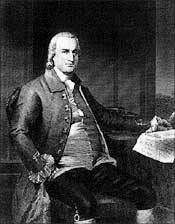 Oliver Wolcott, American patriot and soldier of the Revolutionary War, was born in 1726 in Windsor, CT. He was the youngest son of Roger Wolcott, who was colonial governor of Connecticut in 1751-54.

After graduating from Yale College (now Yale University) in 1747, Oliver Wolcott was commissioned a captain by the governor of New York, raised a company of volunteers and served on the northwestern frontier in the French & Indian War. He was promoted to major general.

At the end of hostilities in 1763, he returned to Litchfield, CT where he practiced law. He was elected to the State Council while also serving as judge of the court of common pleas and judge of probate for Litchfield.

Wolcott was chosen as a delegate to the Continental Congress in 1775-78 and 1780-84 but was absent much of the time on military duty as major general in charge of Connecticut’s militia. He signed the Declaration of Independence in September of 1776.

Wolcott led 14 Connecticut regiments to the defense of New York in 1776. After the battle of Long Island. he resumed his seat in Congress and was with that body when, in December 1776, Congress fled to Baltimore to avoid British troops which occupied Philadelphia.

Having raised several thousand troops during the summer of 1777, General Wolcott reinforced General Putnam’s forces on the Hudson River and in the fall of that year he joined General Horatio Gates, commanding a brigade of militia that took part in the defeat of General Burgoyne at Saratoga in Oct. of 1777.

Returning to Congress, then assembled in York, Penn., he resumed his seat and remained until July, 1778. He served 10 years, 1786-96, as lieutenant governor of Connecticut and then was elected governor, serving in that office from 1796 until his death in 1797 at the age of 72.

In 1776, Gov. Wolcott’s home in Litchfield was the scene of a famous episode. Exactly one week after the adoption of the Declaration of Independence, an equestrian statue of King George III, which stood on Bowling Green in lower New York was taken down and carried by night to the general’s home. Here a celebration was held and the lead statue melted down and cast into bullets, making 42,088 cartridges which were used by Continental soldiers. Some fragments of the statue escaped the bullet mold and, having gone through various adventures, remain today – some in private hands and others in museums. It is possible that other pieces will turn up and that even the head, last seen in London in 1777, still exists.

His son Oliver Wolcott. Jr. became Secretary of the United States Treasury in 1795-1800 and the first Governor of Connecticut (1817- 1827) under the Constitution.