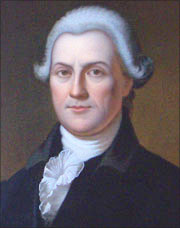 Born into a moderately prosperous Puritan family, Samuel Huntington undoubtedly grew up working on the family farm. A self-taught youth, he was encouraged by the local minister, the Reverend Ebenezer Devotion (1714 – 1771), whose daughter Martha he later married, to use his library. Although nothing is known about his legal training, he was admitted to the bar in March 1754, at first practicing in Windham but soon moving to the larger and wealthier town of Norwich with its more numerous economic and political opportunities.

His law practice and reputation grew rapidly, both inside and outside Connecticut, and bore fruit in his being elected to important town and colony offices: the town’s chief attorney; town tax collector; town-meeting moderator; justice of the peace; and in 1773 appointment to the superior court, the colony’s highest court. In 1776 came other great honors — election to the small upper house of the General Assembly, having already served briefly as a deputy, and appointment to the Council of Safety.

A man of cautious, reticent, and conservative temperament, he nevertheless joined the Sons of Liberty in opposition to the Stamp Act, although he was hesitant about further strong protests. The passage of the Coercive Acts in 1774 to protest the Boston Tea Party brought many moderates, including Huntington, into a more active role. Throughout the Revolution he served both in Congress and the Connecticut upper house. On July 4, 1776, he was one of Connecticut’s signers of the Declaration of Independence. The esteem with which he was held by Congress was evidenced by his election in 1779 to the first of two terms as president of the Continental Congress. While he was president in 1781, the Articles of Confederation went into effect, thus making him the first president of the United States. He served in this office during a dark period of severe economic problems and terrible military defeats, including the loss of Charleston, South Carolina.

In 1784 he was elected Connecticut’s lieutenant governor, automatically becoming chief judge of the superior court, and in 1786 he became governor. He proved to be an extremely popular governor, winning each election until his death in 1796, with his chief concern being the economic and political welfare of the people. While serving as Connecticut’s chief executive, he firmly advocated the ratification of the new Federal Constitution.

Aware of the need to diversify Connecticut’s economy, he laid the foundations of Connecticut’s future industrial expansion by espousing development of “useful Manufactures.” The first manufacturing company to be incorporated in the United States was a silk manufacturing company in Mansfield in 1798. He labored actively for improvement of schools and roads, a more humane legal system, and fiscal reform. He advocated toleration of all religious sects and the abolition of slavery. During he governorship what is now the Old State House was authorized and built. A modest, industrious, independent-minded, and pious man throughout his distinguished career, he exemplified the ideal of the Puritan magistrate dedicated to the betterment of society.

From CONNECTICUT HISTORY AND CULTURE: An Historical Overview and Resource for Teachers, published by the Connecticut Historical Commission.