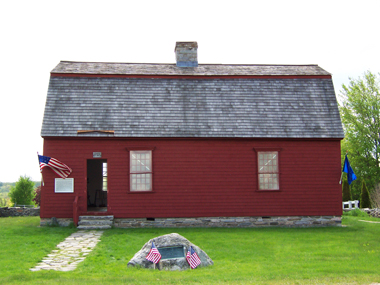 How to Volunteer as a Docent and view the Docent Schedule

During the American Revolution, the former store and office where Jonathan Trumbull conducted his mercantile business became the headquarters to plan the defense of the colony of Connecticut. Located near the northwest corner of the Hartford-Norwich Highway (Route 207) and West Town St. Jonathan Trumbull served as the Governor of both the colony and the state from 1769 – 1784, a period of 15 years.

Here in the War Office. as it came to be called. Governor Trumbull convened the Council of Safety to deal with the day to day emergencies. Many of the over 1100 meetings of the council were held in this building from 1775 to 1783.

The Governor’s experience in provisioning and his knowledge of supply locations throughout the region served him well when called upon by General Washington for supplies for the Continental Army.

Military leaders who were known to have met with the Governor and council here in this building were:

The War Office is listed on the National Register of Historic Places. The Building has been owned and maintained by the Connecticut Society of the Sons of the American Revolution since 1891.