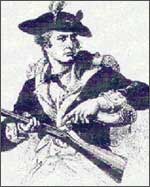 When news of Lexington reached Ashford, Knowlton grabbed his musket and powder horn and joined his militia company. The Ashford Company was part of the Fifth Regiment Connecticut Militia along with the towns of Windham, Mansfield, and Coventry. The Ashford Company had no captain so they drew ballots and Knowlton was unanimously chosen. The  Militia Company from Ashford was the first to enter Massachusetts from a sister colony. At Boston they were reorganized into the Fifth Company of General Israel Putnam’s Connecticut Regiment of 1775.

The night prior to the Battle of Bunker Hill, Captain Knowlton was in command of a fatigue party of 200 Connecticut men constructing defenses. During the battle he was in command of the rail fence which protected the rear of the Patriot redoubt on Breed’s Hill. When the Patriots began their retreat from the redoubt it was Knowlton and his men who formed the rear guard covering their retreat.

For his bravery Congress promoted Knowlton to a Major. A wealthy Boston man presented Knowlton with a gold-laced hat, sash, and a golden breastplate. Colonel Arron Burr later in life said of his friend Knowlton, “I had a full account of the Battle from Knowlton’s own lips, and I believe if the chief command had been entrusted to him, the issue would have proved more fortunate.” Burr also commented on Knowlton’s promotion, “It was impossible to promote such a man too rapidly.”

In 1776, with the reorganization of the American Army, Knowlton was assigned to the 20th Continental Regiment commanded by Colonel john Durkee.

During the Siege of Boston in 1776, Knowlton was sent by Washington to burn the remaining buildings at the base of Bunker Hill, and to capture the British guard. Knowlton accomplished this mission without firing a shot or losing a man.

In New York on August 12, 1776 Knowlton was promoted to Lieutenant Colonel. In September he was put in command of an elite hand picked independent corps which was under the direct command of Washington. This unit was called the “Rangers”, or “Knowlton’s Rangers.” (Captain Nathan Hale was a member of this unit) On September 16, 1776 Knowlton’s Rangers were scouting in advance of the main army at Harlem Heights, New York when they stumbled upon the Black Watch. A skirmish began which ended with Knowlton being mortally wounded. Knowlton was carried off the field to prevent capture. He is reputed to say, “You see my son, I am mortally wounded; you can do me no good; go fight for your Country. “Washington upon hearing the news stated, “The gallant and brave Col. Knowlton, who would have been an honor to any country, having fallen yesterday while gloriously fighting.” Knowlton was buried with military honors in an unmarked grave at 143rd St. and St. Nicholas Ave.

Knowlton is described as being six feet high, erect and elegant in figure, and formed more for activity than strength. He had light complexion, dark hair, and eyes of deep spiritual beauty.