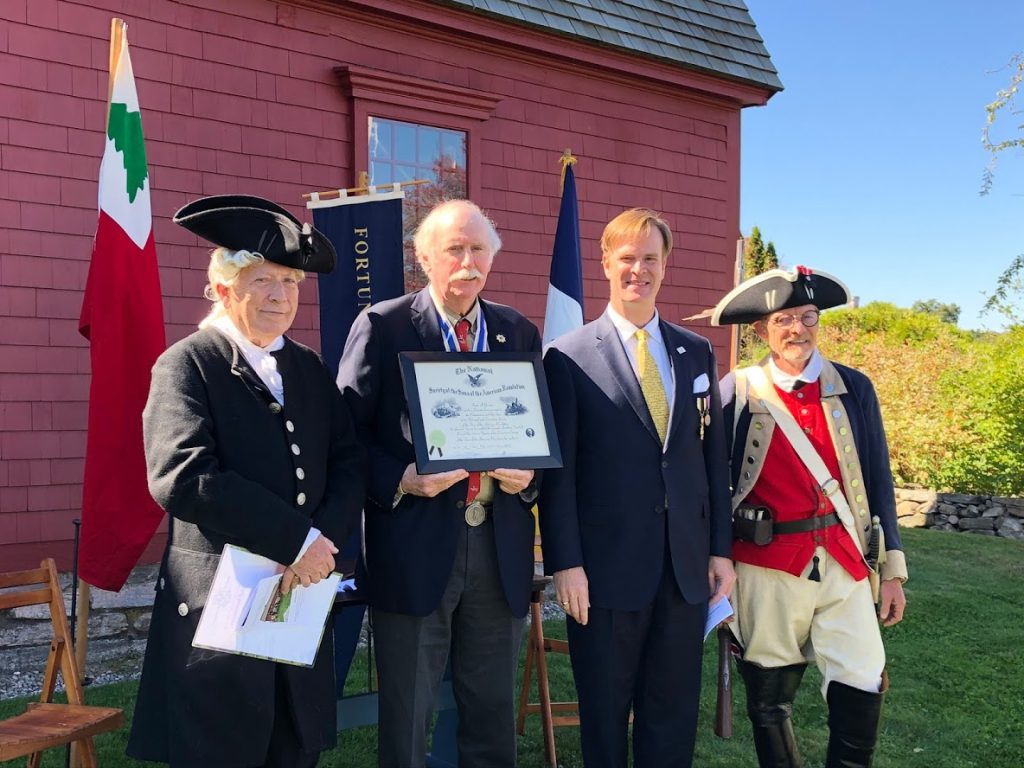 Saturday Oct 5th, President-General John T. “Jack” Manning presided over the the chartering ceremony for the Gov. Jonathan Trumbull Branch No. 13 at the War Office in Lebanon.  Following the oath of office given by PG Manning to State President Damien Cregeau and State Secretary Paul Selnau who will be the new branch officers, PG Manning toured the War Office and both the Gov. Trumbull house and that of his son, Jonathan Trumbull, Jr.

For additional information on this event and other Color Guard Activity. 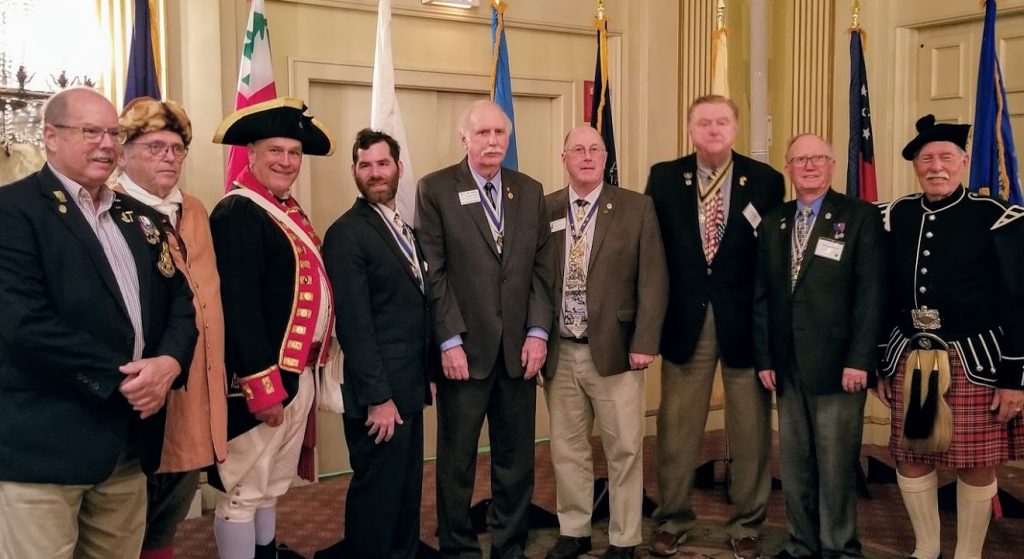 238th Anniversary of the Battle of Groton Heights 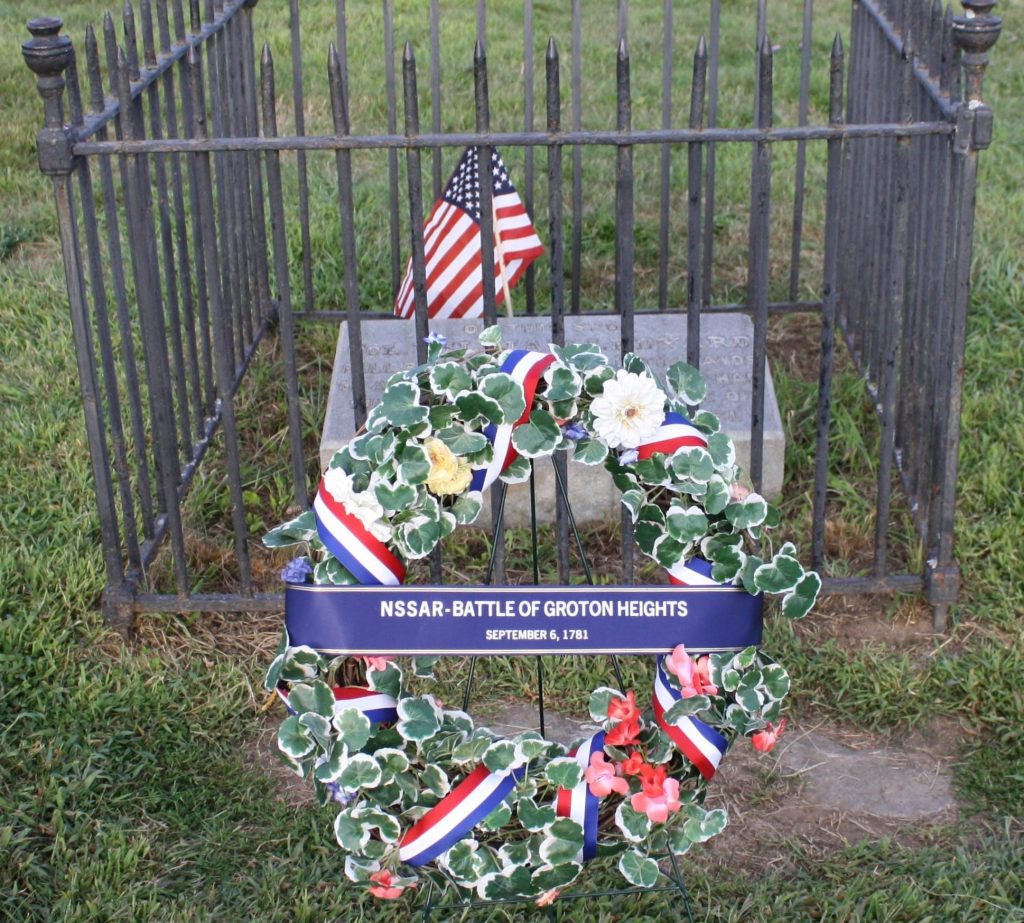 Members of The Connecticut Line along with Capt. Nathan Hale Branch President Stephen Taylor participated in two ceremonies commemorating the 238th Anniversary of the Battle.

Link to Photos: Ceremony at Colonel Ledyard’s Cemetery and Ceremony inside Ft. Griswold

Celebrating the  240th Anniversary of the 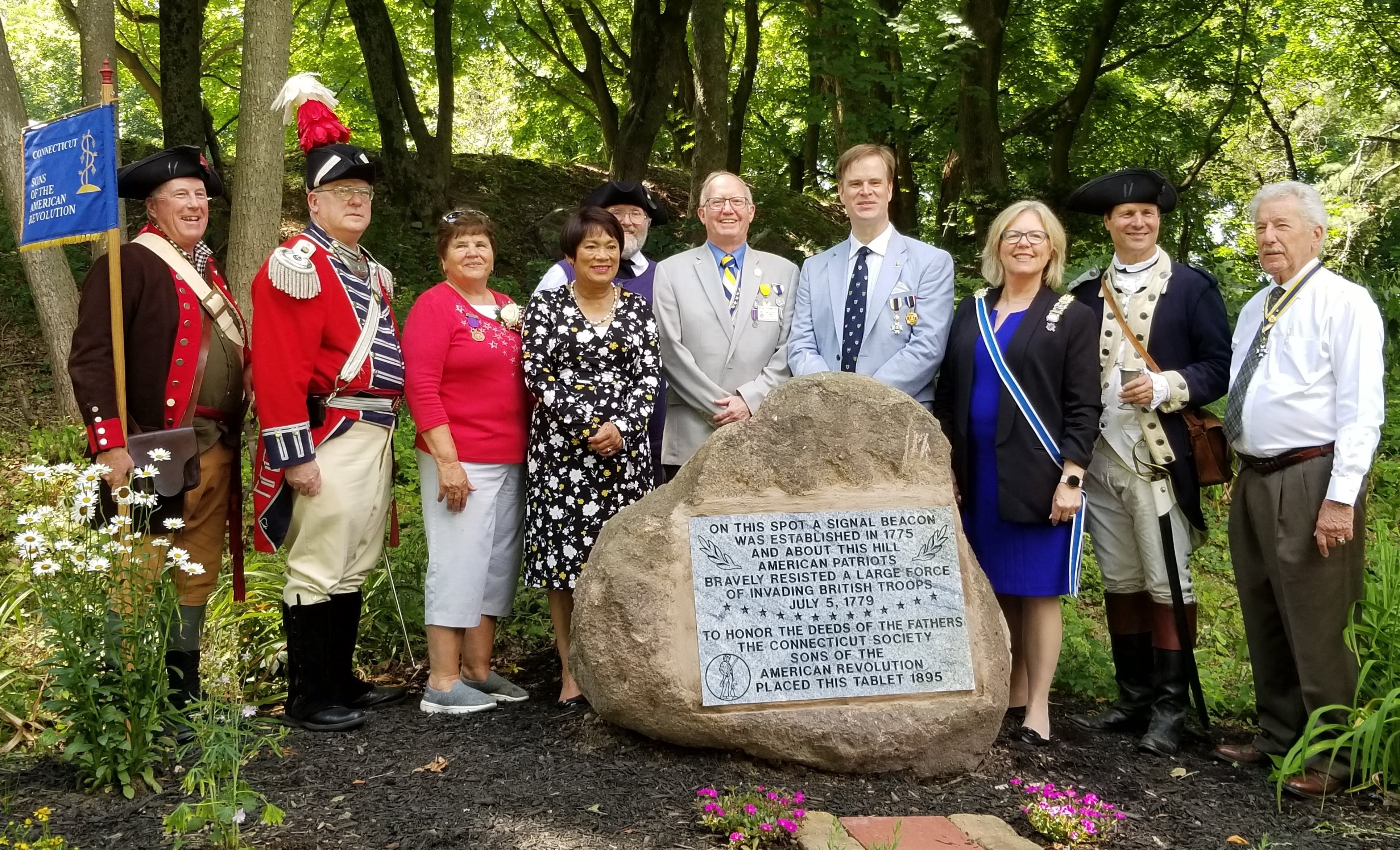 On Saturday July 13, we celebrated the 240th Anniversary of the Invasion of New Haven.  It was a great success. We had over 75 people attend this event along with the Mayor Toni Harp of New Haven. There was also an encampment of the Connecticut Line on the top of Beacon Hill next to the 1812 bunker which was surrounded by Fort Wooster, which no longer exist.  We had a combined 3-volley musket salute after the unveiling of the new tablet. Refreshments were served by the Friends of Fort Wooster and the New Haven Museum.  There are many people that came together to make this event happen and I would like to thank you all.  Special Thanks to the SAR George Washington Endowment Fund for providing the funding for the new tablet.
Ethan A. Stewart, Sr.
Past Connecticut SAR President
General David Humphreys Branch No. 1 Secretary 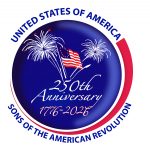 Enjoy this Facebook link to 250th activity across the SAR

New Signage in East Haddam for the Nathan Hale Schoolhouse 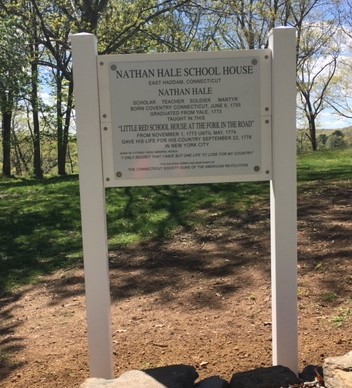 On May 8, Real Property Steward, Dave Packard along with his son John, installed the new signage at the Nathan Hale School House just inside the stone wall entrance way to the property.  The graphics were done by Camaro Signs of Norwich. The material were purchased from Montville Hardware and Lowe’s in Waterford.  Funding came from the property budget and a donation from the Nathan Hale Chapter DAR.

Members of the Connecticut Line marching towards North Bridge during the 3-mile parade route in Concord.  Despite early morning thunderstorms, the rain stopped and a good time was had by all who participated in the events of the day, including our young drummer boy. 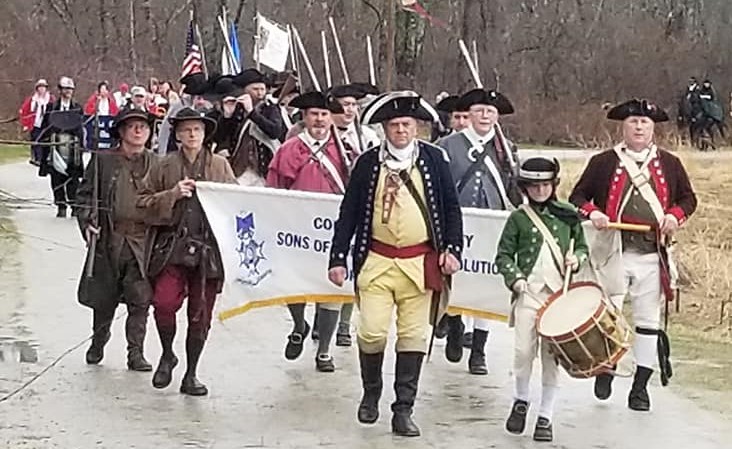 November 10 Grave Marking of Daniel Jackson and the dedication of the new entrance way and memorial marker at the Christ Episcopal Church Cemetery in Stratford, CT 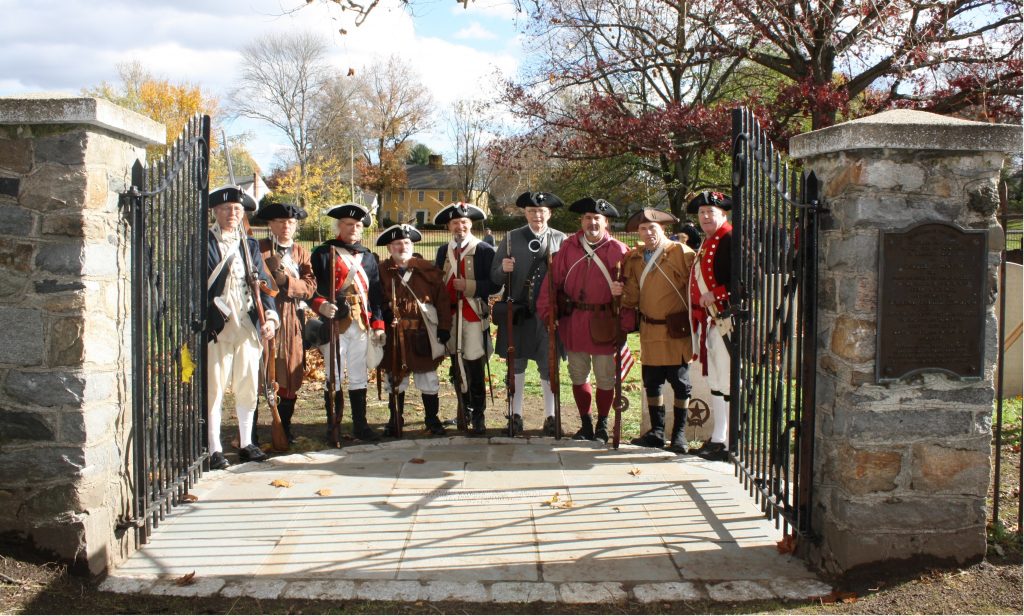 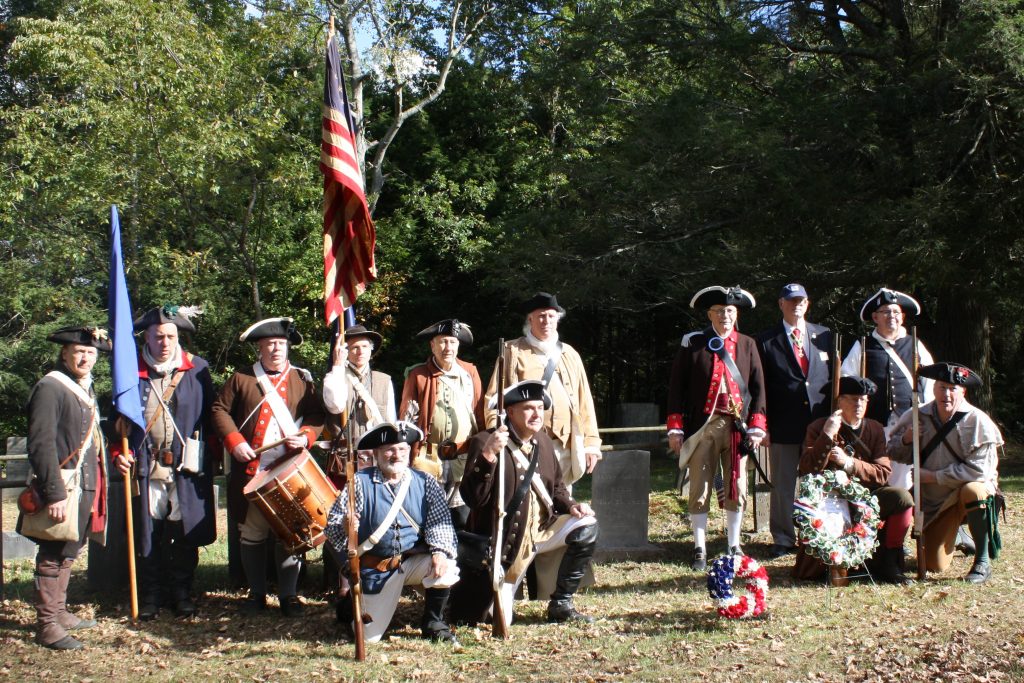 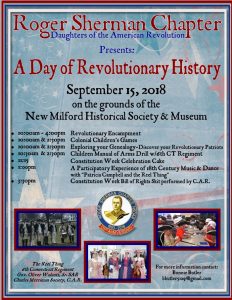 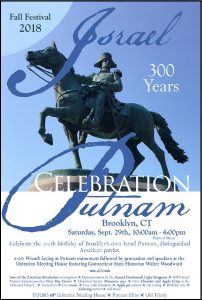 243rd Anniversary of the Battle of Bunker Hill 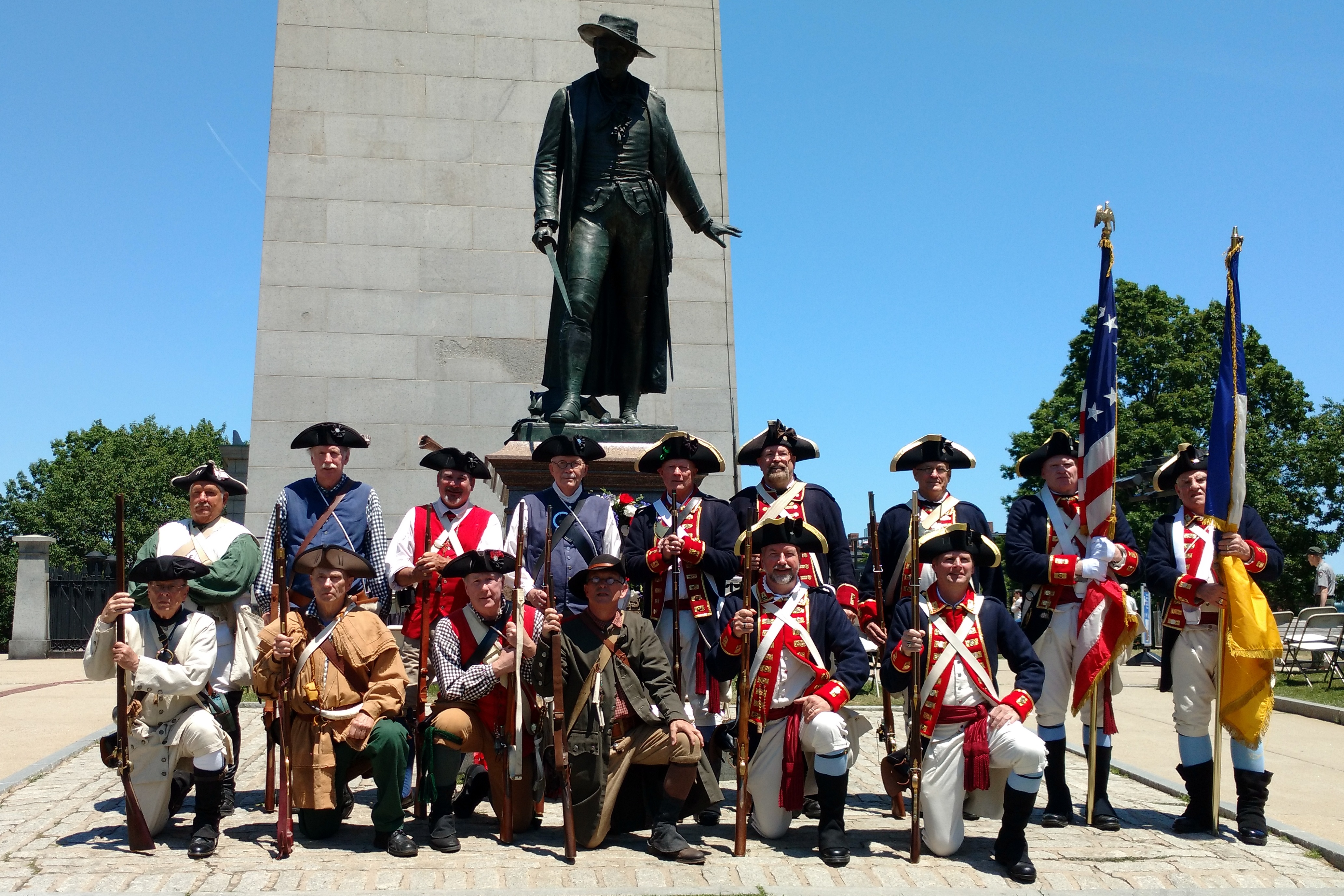 Members of the Connecticut Line participated in the commemorative exercises in Charlestown, Massachusetts on Sunday June 17th along with members of the MASSAR Color Guard. Following an memorial service at Church of St. Frances de Sales, we paraded up Bunker Hill Street to the Bunker Hill Monument grounds where the annual commemorative exercises are held, which concludes with a 3 volley musket salute and a wreath laying at the Connecticut and New Hampshire gates. Following the days events, the Connecticut Line had lunch at Warren Tavern before starting our journey home! 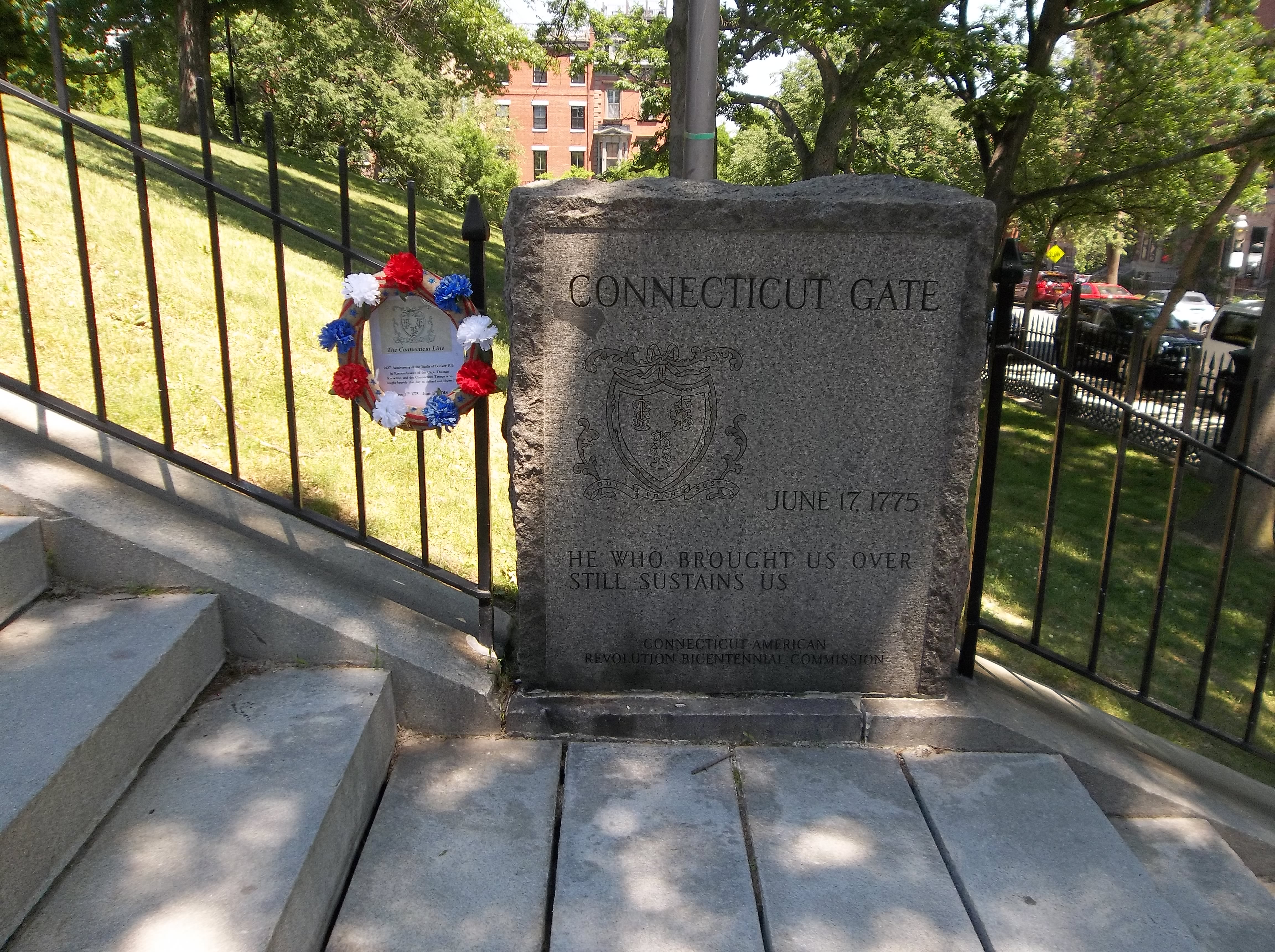 At the meeting on April 21, the following State Officers were elected for the 2018-2019 term of office:

In addition to the State Officer elections, we also had Youth Awards for Eagle Scout and JROTC, with each winner receiving a medal and certificate along with a check for $500.

The highlight of the day was the presentation of the State’s 1st Challenge Coin to several of the State Officers by President Ethan Stewart. The rest of the 50 coins were purchased by the members present at a cost of $10 per coin. An additional 100 coins have since been ordered and are available for sale. Please contact Ethan Stewart for more information at sarethan@optonline.net

2017 ‘Wreaths Across America’ in Lebanon, Milford and Bantam 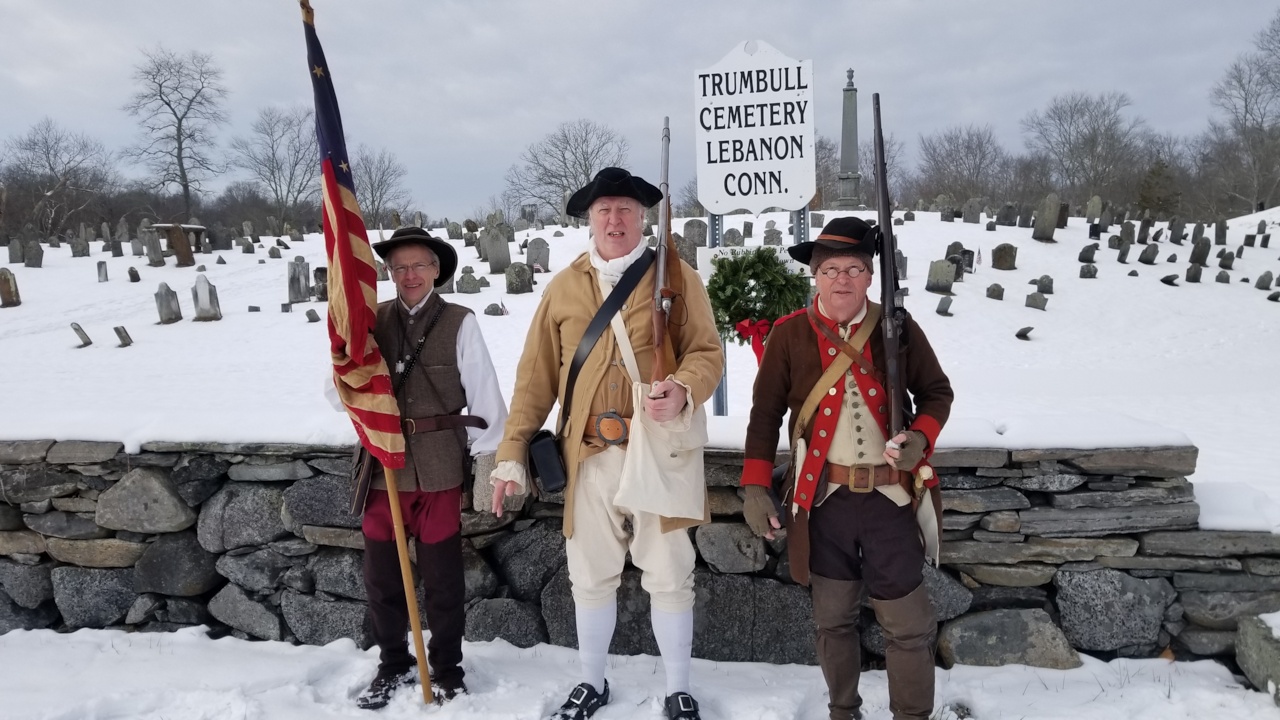 Members of the 7th CT Regiment along with Dan Dudley participated in ‘Wreaths Across America’ at the Lebanon War Monument and also honored Governor Huntington at his burial site. The Lebanon Militia joined us at both locations. CT Color Guard members in uniform were Dave Packard, Dan Dudley, Jim Rothgeb, and Tyler Smith. WAA Pictures from Lebanon See Facebook below for addition pictures and video. 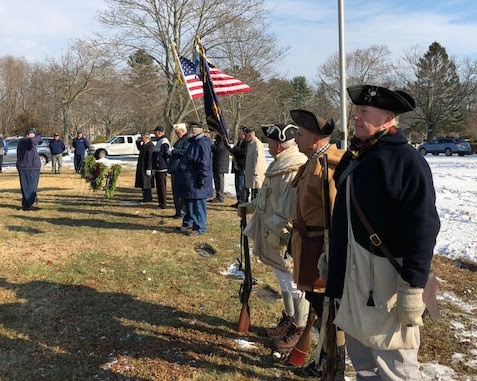 We had a very cold and well attended Ceremony yesterday in Bantam, all branches of the service were represented for the placement of seven wreaths. In addition to several DAR and SAR members, and the general public, we also had two early teens dressed in WW I period clothing. It made for a very successful ceremony. The following members of the Wolcott Detachment were present: Paul Selnau, Ken Buckbee, Derek Brockhoff, John King, Martin Spring, Jim Klaneski, and Doug Grove.

Christmas Tree Lighting on the Lebanon Green with members of the Connecticut Line Color Guard at the Gov. Trumbull War Office 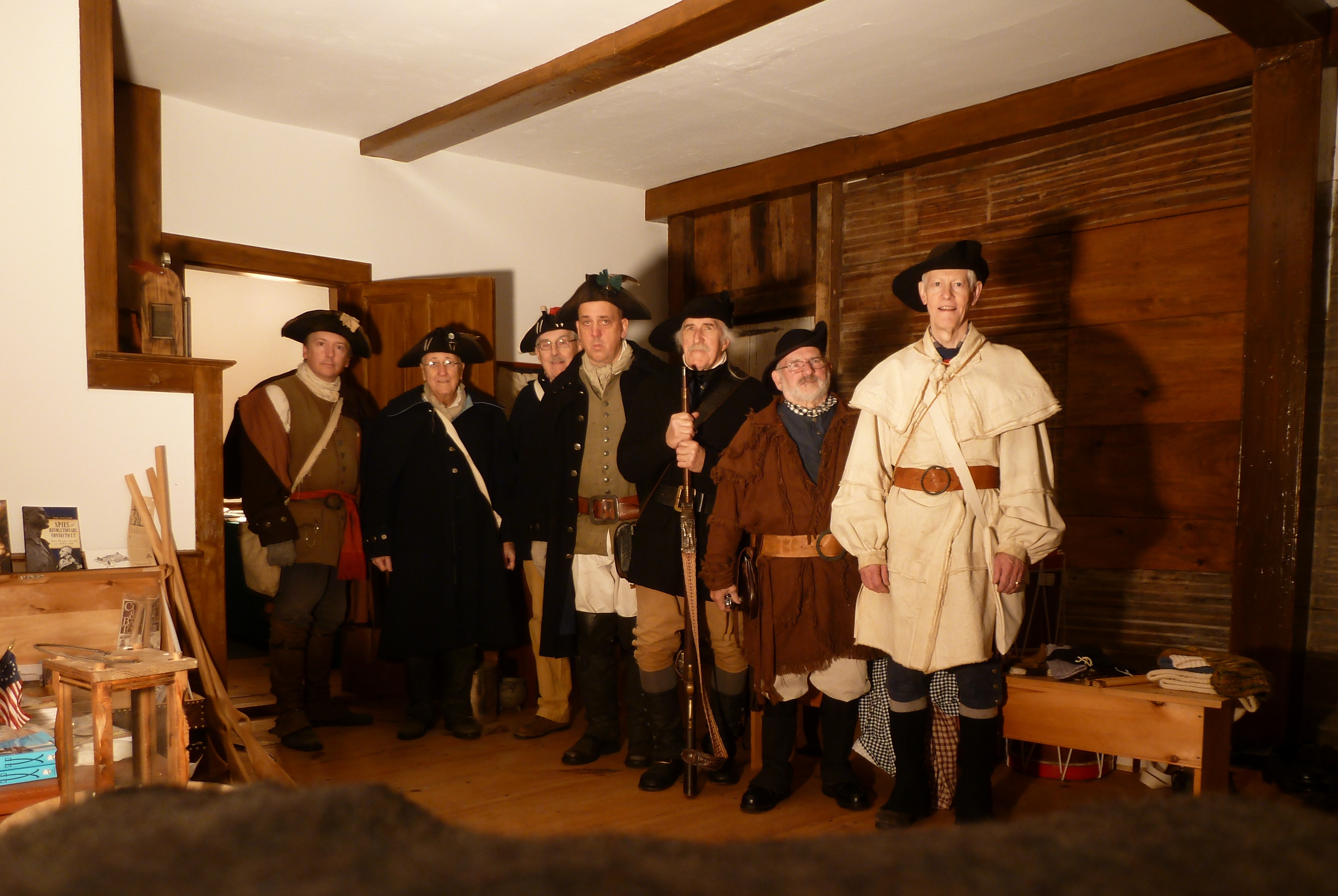 The event included the lighting of the tree, Christmas Carols, and a visit from Santa. Following the program, visitors were able to stroll around the Green on the candlelit walking path, visit the historic homes which were open for tours and enjoy the bonfire behind the Library.

Veterans Day 2017 in Torrington with members of the Wolcott Branch 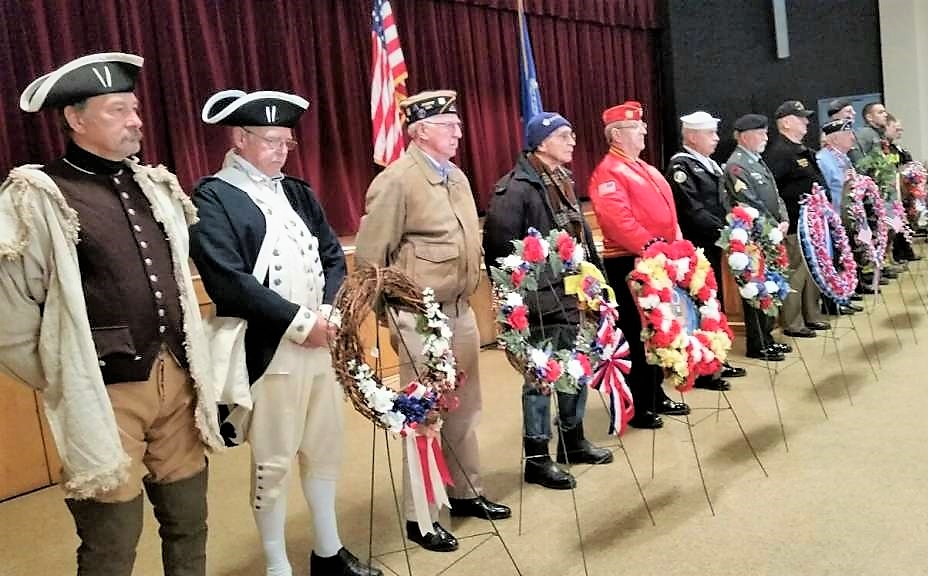 Members of the Gov. Oliver Wolcott, Sr. Branch participated with various other patriotic and military organizations in a Veterans Day program by placing wreaths to honor our veterans. Color Guard members, Jim Klaneski and Jon King, represented the SAR at the ceremony which was held at Coe Park in Torrington, Connecticut on November 11, 2017. The Torrington Veterans Support Committee organizes this ceremony annually. 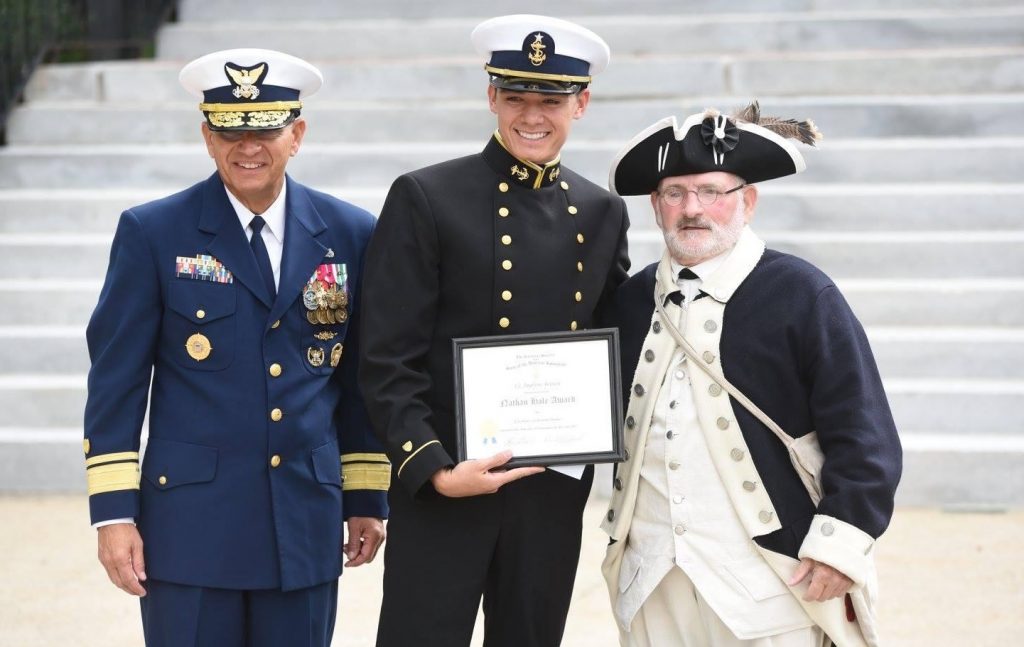 The CT-SAR established the Nathan Hale Award in the Fall of 2015. It is a cash award given to a cadet who excels in Security Studies. Providing the award is a way of recognizing the USCGA as the only service academy in Connecticut and thanking them for their continuing support of the CT-SAR by having cadets participate in our annual fall cleanup at the Nathan Hale School House in East Haddam. Naming the award after Nathan Hale is appropriate since the USCGA is in New London, one of the two locations where he taught. Presenting the award to a cadet who excels in Security Studies connects to Nathan Hale’s role as a spy. The award is presented at the USCGA’s Parents’ Weekend Fall Awards Ceremony. The recipient for this year was 1st Class Cadet Andrew Brown. Fall Cleanup East HaSAR State President Ethan A. Stewart, Sr. (l) and DAR State Regent Alice E. Ridgway (r) hosted a joint grave marking ceremony at the Christ Episcopal Church cemetery for 18 revolutionary war patriots buried there. Mayor John A. Harkins (c) of Stratford read proclamations for the effort put fore by both organizations. Following a speech by Connecticut SAR 1st VP Damien Cregeau on patriot and signer of the U.S. Constitution William Samuel Johnson, a wreath was laid at the head of the new SAR/DAR marker unveiled earlier that day. The Connecticut Line / Living History unit and the 6th Connecticut Regiment did a combined 3 volley musket salute and Connecticut State o 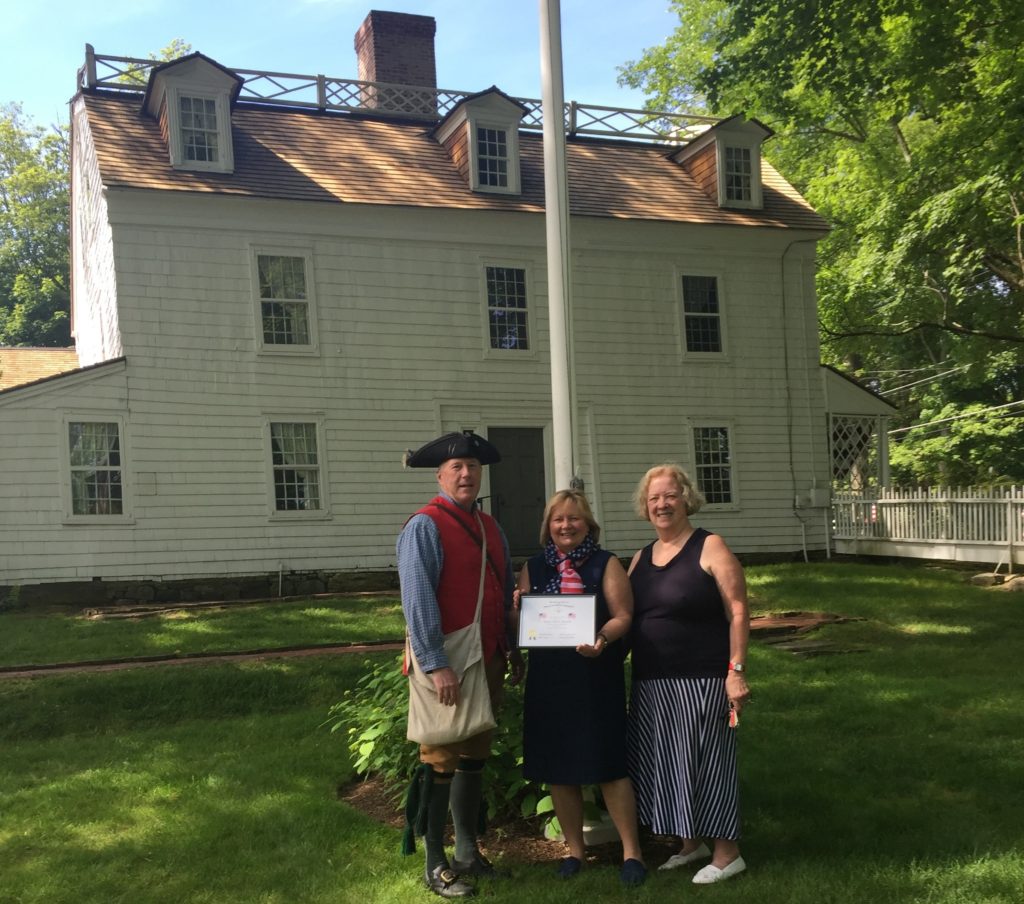 State awards chairmen Dave Perkins presented the SAR Flag certificate on behalf of the Connecticut SAR to Hilary Micalizzi, President of the Keeler Tavern Museum in Ridgefield on Sunday June 12th. Also present was Sara Champion of the DAR Drum Hill Chapter, who is a member of the board of directors for the museum. The Keeler Tavern was a major host during the recent Battle of Ridgefield reenactment in April. 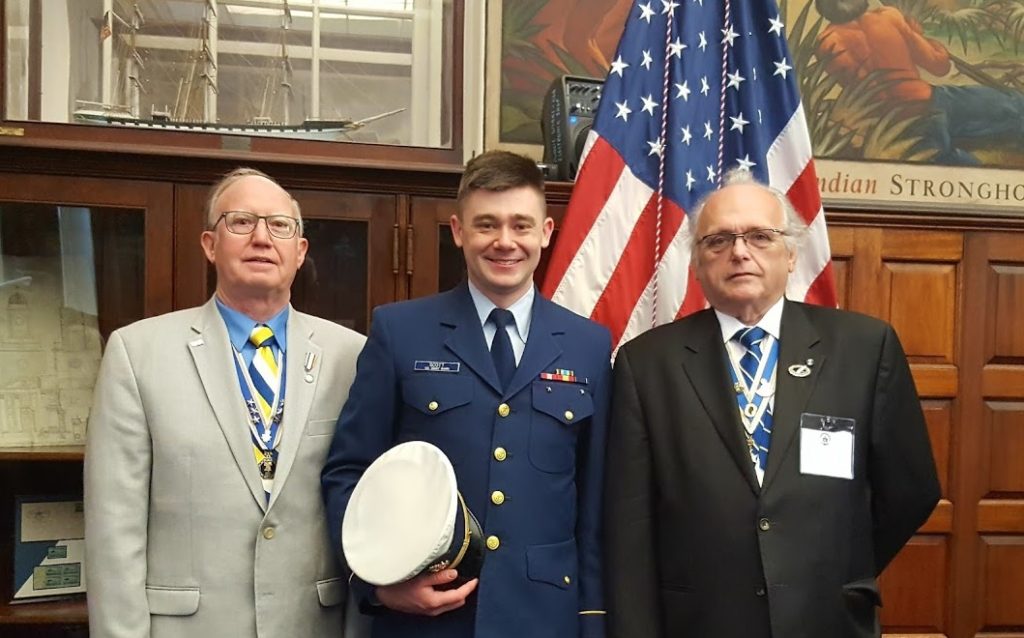 1/C Frederick M. Scott V was presented with the Alexander Hamilton Award by Wayne Mallar, Vice President-General for the New England district. Fred was a member of the Glee Club, was class President for 2 years. He also had 10 members of his family including his fiance there the awards ceremony and graduation on Wednesday. They live in Southborough, Massachusetts. Fred’s first duty station is in Boston, followed by duty in Panama Canal and Columbia. State President Ethan Stewart along with past VPG Doug Wood attended the awards ceremony. 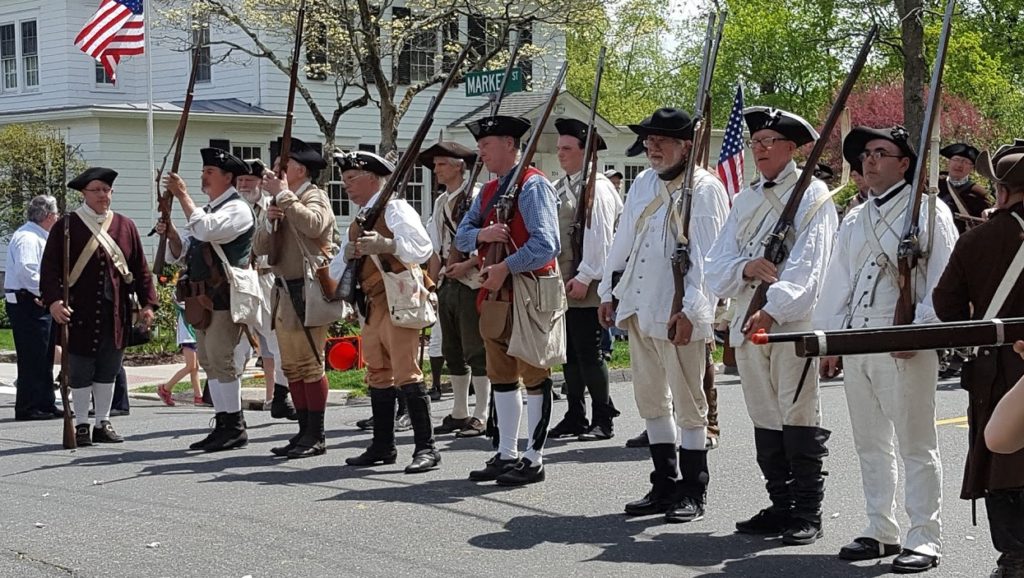 The Connecticut Line took part in the re-enactment along Main Street in Ridgefield on Saturday April 29th. With about 100 American and British soldiers in total, the battle was a huge success. The sponsor of the event was Jerusalem Masonic Lodge #49 of Ridgefield. The links below with take you to pictures & videos & news of the battle:
CTSSAR Pictures & Video
Keeler Tavern
Danbury Newstimes
You tube video – Battle of Ridgefield 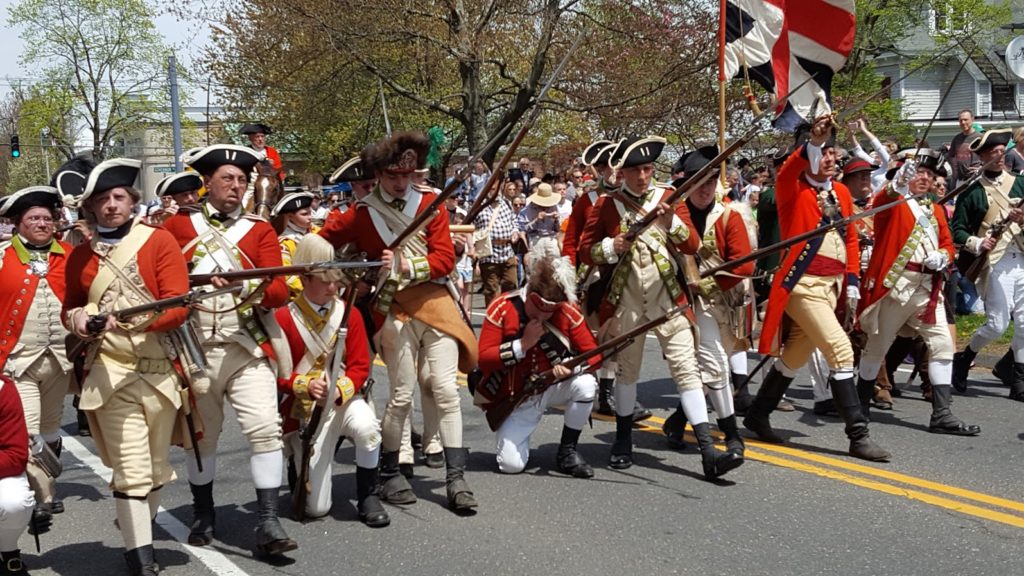