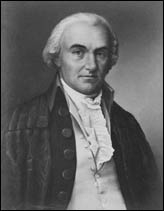 Jurist, statesman, and naturalist, Ellsworth was born to parents determined to make him a minister. After studying under the Reverend Dr. Joseph Bellamy (1719/19-1790), he entered Yale College in 1762. Youthful pranks, however, proved his undoing and in 1764 he was dismissed. Entering Princeton, where no notable misbehavior marred his record, he graduated in 1766.

Law proving more attractive than the ministry, he studied first under Matthew Griswold (1714-1799), and then under Jesse Root (1736-1822). Admitted to the Connecticut bar in 1771, he opened a law office in Windsor. Election in 1773 as a deputy and in 1774 as a justice of the peace gave him entrée to political positions. Too poor to own a horse, he was forced to walk the twenty-mile round trip when the General Assembly and courts met. Hoping to enhance his status as a lawyer and public servant, he moved to Hartford.

At the Constitutional Convention he played an influential role in the discussions leading to the ” Connecticut Compromise” and proposed the title “United States” for the new government. In a series of letters to the newspapers under the pseudonym “A LANDHOLDER,” he attempted to win over the common man, especially the farmers, by powerfully articulating the benefits to be derived from ratification. Chosen one of Connecticut’s first two United States senators, he contributed to many significant pieces of legislation. He helped to draft the first ten amendments to the Constitution and the Judiciary Act of 1789, which organized the Federal court system, and he was on the committees for funding the national debt and creating the Bank of the United States.

A strong Federalist, as chief justice he gave conservative leadership, even giving strong support to the Alien and Sedition Acts. Returning to Connecticut in 1801, he was again chosen a member of the upper house where he served until his death. Appointed in 1807 to be the first chief justice of the state supreme court, illness forced his resignation. Although a supporter of states’ rights, he worked prodigiously to build a free federal union which provided security and prosperity for future generations.