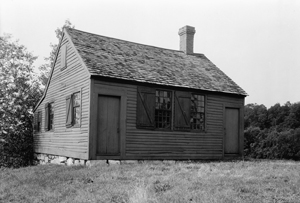 During the 17th and 18th centuries there lived in the District of East Haddam, Connecticut, many of the good old New England families, whose members and descendants have helped to make the history of this ever progressing country of ours. Among them were the Atwoods, Barnes, Brainards, Bulkeleys, Chapmans, Coles, Clarks, Champions, Emmonses, Tullers, Gates, Greens, Graves, Goodspeeds,
Piersons, Marshalls, Nicholses, and Spencers.

Splendid farms were laid out, churches and schools were established, and manufacturing interests were being discussed, when the demands of the Colony called upon the heads of these families for their assistance in the protection
of home interests and for the freedom from foreign rule and mismanagement — they responded nobly, as of a single voice — today we find in the Colonial and Revolutionary War records all of these and many other family names from
East Haddam as soldiers whose endurance and skill as fighters and marksmen in ranks as privates was essential to its success as the cleverness and executive ability of those who filled every officership to that of Major-General.

About 1749-50 it became apparent to those families in East Haddam that a schoolhouse was necessary in that district, and through their influence the building
was erected.

It is unfortunate that the town records do not disclose the names of the early teachers in that schoolhouse.

It was probably about the first of November, 1773, that ” Nathan Hale ” began his career as a teacher in that little building which was located at the ” forks ” in the road between Moodus Landing and Chapman’s Ferry. For in those days there were usually but two school terms in the year — a five months winter term and a four months summer term.

Nathan Hale was then a strong, athletic youth of eighteen years. He had graduated from Yale College with honors and was well fitted for the profession he entered
upon — but as he wrote his old college friend, Mr. Mead from New London, May 2, 1774, ” he concluded that East Haddam was too inaccessible, either by friends, acquaintances, or letter,” so he removed to New London, where he taught from May, 1774, to July, 1775.

Stuart’s “Life of Nathan Hale, the Martyr Spy,” contains extracts from a letter written by Mrs. Hannah (Green) Pierson, who knew Hale well when he lived in East Haddam, in which she says that ” he was a happy and faithful teacher, everybody loved him, he was so sprightly, intelligent and kind and so handsome.”

Judge Atwood in his Reminiscences said that, “he had it from the lips of a successful teacher, who taught in the same building twenty years later, that he received the munificent sum of four dollars a month for his services and boarded around, and that was the rate for teachers’ wages in and before his time.”

This building was used as a school until 1799, when another larger one was purchased, at which time Captain Elijah Atwood purchased the original schoolhouse
and removed it to the north some one hundred yards, to a place just south of the old burying ground, and, by adding a little to it, converted it Into a dwelling house. He lived in it until his death in 1816, from that time until 1899 it had always been occupied by his descendants. In 1850 it was purchased by Judge Julius Atwood. In 1899, one hundred years after it came into the Atwood family, Judge Julius
Atwood presented the building to Col. Richard Henry Green, of the New York Society Sons of the Revolution, for the purpose of its being passed by him to Society Sons
of the Revolution. Col. Green had the building removed at his own expense to its present site on the banks of the Connecticut river, just back of the old burying ground and the Church and transferred it to the New York Society Sons
of the Revolution.

President Hon. Morgan G. Bulkeley presented the Connecticut Society with eight acres of picturesque ground on the banks of the Connecticut river at East Haddam, which surrounds the Nathan Hale Schoolhouse and it has been converted into the “Nathan Hale National Park.”

The formal acceptance of the Nathan Hale Schoolhouse and Park was held June 6, 1900, the one hundred and forty-fifth anniversary of the birth of Nathan Hale, when
it became the Headquarters of the Connecticut Sons of the Revolution, where the annual meetings are held during the month of June. The ceremonies were combined with the Bicentennial celebration of the town of East Haddam, and the unveiling of a bronze bust of Nathan Hale by the townspeople to mark the original site of the schoolhouse when Hale taught in the winter of 1773-74.

Presentation of the Nathan Hale Schoolhouse by F. S. Tallmadge, Esq., President of the N. Y. Society Sons of the Revolution.

Acceptance by Hon. Morgan G. Bulkeley, President of the Connecticut Society Sons of the Revolution.

-Benediction-
Later Col. Richard H, Green gave to the Connecticut Society the old clock that stood in the house of his grand father, Captain James Green, at East Haddam, during the
time Hale boarded there while he was teaching. This gift the Society also values very highly.

In 1799 when Elijah Atwood purchased the building, he added that part under the low roof, and all that now remains of the original structure is the solid oak frame, the old oaken floor in the main body, on which the feet of Nathan Hale so often trod, the rafters, the roof boards and the old oak planking, which stand as a silent memorial to Nathan Hale, the Patriot Martyr Teacher.