That Nathan Hale began the work of his brief and ill-fated life as a school teacher in East Haddam, has long been known to all acquainted with the incidents of his career prior to his enlistment into the patriot army at the out-break of the Revolution. Hale graduated at Yale College in September, 1773, and late in the fall of that year was employed to teach in the public school in what is now known as the second or ” Landing ” school district in East Haddam for the winter term. He remained in the school only until the spring of 1774 when he se-cured a much better position as teacher of the Union Grammar School in New London. 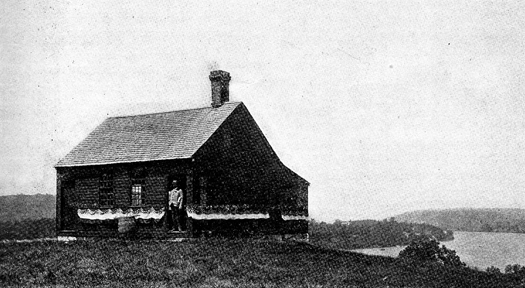 Until within a few years the interesting fact that the building in which Hale instructed and disciplined the youth of the “Landing” district during these few months was still standing, and in such condition that it might be preserved for many years to come, was wholly unknown to the general public. Hale’s association with the building had passed from the minds of men, and a very few only, even among the people dwelling in its immediate vicinity, had knowledge of the historic interest it possessed. But for the increasing attention bestowed upon the incidents and memorials of the Revolution during recent years, stimulated in great part by the institution of many patriotic orders, it is probable that the Nathan Hale School House In East Haddam would soon have fallen into decay, and Hale’s connection therewith have been forgotten.

In a communication published in the Connecticut Valley Advertiser in the year 1894, judge Julius Attwood of East Had-dam, then and for many years before the owner of the building, ga ve its history to the public, and furnished indisputable proofs of its identity.

When Hale came to East Haddam in the fall of 1773, he gathered his pupils about him in a low, one-story building, then standing upon the small triangularpiece of land now constituting the village green, or park place, a short distance east from Chapman’s Ferry, the historic name of the present ferry at Goodspeed’s Landing. On the one hand the highway led easterly towards Town Street, and on the other, turned up the hill to the north and led on to East Haddam Landing,. then, and long afterwards, commonly called Moodus Landing. It is well to re-member that from its first settlement, in common speech and in public records,. East Haddam was frequently called Machimoodus, later contracted to Moodus,. and that the present village of Moodus was not so named until about 1850, having been before that time called Mechanicsville.

The building was originally rectangular in form, and similar in all essential respects to the school houses commonly found to as late a date as 1850 in East Haddam and other country towns, some of which with changes and modern improvements have remained until the present time. Its furnishings were rude and simple, like those of other school houses of the time; a period, it must be remembered, long before the modern ideas with respect to seats, desks and the proper number of cubic feet of air for pupils came into vogue. Those readers whose recollections carry them back to the country school house of fifty years ago or more will be able to fill up the picture of the school room where Hale presided during his sojourn in East Haddam. To those of later days, no description will make clear the bareness of the school rooms in which our great grand parents received the common school education then, as now, required by statute law.

How long this building had been used for school purposes before Hale came to East Haddam does not appear, but it continued to be used for the district school until 1799, when a larger and more commodious building became necessary. The Hale school house was then sold to Capt. Elijah Attwood, who removed it some distance north to a site on the west side of the road to East Haddam Landing nearly in front of the present St. Stephen’s church. Capt. Attwood built on two additions, and with the necessary internal changes, converted it into a dwelling house. As such it was owned and occupied by him and his descendants for an hundred years. During that time it sheltered a domestic life at once modest and independent, self respecting and useful, and of a type, fortunately still to be found and respected in all the country towns of Connecticut.

With the recent history of the Nathan Hale School House the public has become familiar. After judge Attwood had called attention to the historic building, a movement began looking to its preservation. Richard Henry Greene, Esq., of New York, a great grandson of James Green of East Haddam, captain of a company of light horse in the Revolutionary service, took the burden of the enterprise and raised the funds necessary to put the building in complete repair and remove it to a new sight. Judge Attwood helped along the work by giving the building to Mr. Greene, and William R. Goodspeed, Esq., of East Haddam, donated an admirable new site for the renovated building in his lot on the hill to the west of St. Stephen’s church, overlooking the Connecticut River. Unwilling that the preservation of the building should depend upon any individual life, Mr. Greenetransferred it to the New York Society of Sons of the Revolution, of which society he was an influential member, and the New York Society in turn transferred it to the Connecticut Society of Sons of the Revolution, which has assumed the duty of caring for and preserving this interesting object lesson in history and patriotism.

The present location of the Nathan Hale School House in East Haddam is a beautiful and conspicuous one. The custody and care of the building has appropriately passed into the hands of Connecticut men, and under favorable auspices it will continue to teach its lesson of history and patriotism to the people of East Haddam, and a wider circle in state and country for many long years to come.
Nor has the little park where the school house stood in 1773 been forgotten. There has been placed upon it, through the contributions of George G. Williams, Morgan G. Bulkeley, Wilson C. Reynolds, Mrs. Luther Boardman, William E. Nichols, Ralph B. Swan, William R. Goodspeed, Wilbur S. Comstock and other loyal citizens or sons of East Haddam, a bust statue of Nathan Hale, the work of Enoch S. Woods, the distinguished Hartford sculptor, whose statue of Hale upon the Atheneum grounds in
Hartford has been so much admired-The people of the town are to be congratulated upon the receipt of this gift of a beautiful specimen of the sculptor’s art. Most fitting it is, too, that the spot about which memories of the patriot’s sojourn in East Haddam center should be marked by an artistic and admirable memorial statue.

The public ceremonies of the sixth of June held on the anniversary of Hale’s birth day, fittingly celebrated the successful accomplishment of the work of the patriotic and public-spirited few who determined to save the Nathan Hale School House in East Haddam from decay and destruction, and to secure its preservation for the sake of its historic associations and its inspiration to patriotism. To Mr. Greene above all others is the credit due, and it is to a kinswoman of his, Mrs. Hannah (Greene) Pierson, who knew Hale well while he was in East Haddam, that we are indebted for this brief but expressive tribute to Hale’s personal worth : ” Everybody loved him ; he was so sprightly, intelligent and kind, and withal, so handsome.”