The Scarlet Standard No.1

Historical Series, Number One, July 1997
The Educational Outreach of the General Israel Putnam Branch No. 4
of the Connecticut Society of the Sons of the American Revolution

CONNECTICUT’S RESPONSE TO THE LEXINGTON ALARM

Following the Patriot confrontation with British troops at Lexington and Concord on Wednesday morning April 19, 1775. “An alarm was immediately spread in every direction, so that on the 27th of April it had reached the principal points as far as Baltimore, and by the 11th of May was posted at Charleston, S.C. Throughout New England, the news was rapidly carried by horse expresses from town to town. It was dispatched to Connecticut by the Massachusetts Committee of Safety at Watertown during the progress of the fighting, or near ten o’clock of Wednesday morning, April 19th: The bearer, Israel Bessel, is charged to alarm the country quite to Connecticut, and all persons are desired to furnish him with fresh horses as they may be
needed.” 1  “The alarm which was carried by a man with a drum on horseback, found Putnam ploughing in the field. Putnam merely unyoked his team from his plough, and bidding his boy to go home, and tell his mother where he was gone, mounted his horse, and dashed away down the road towards Boston. In twenty-four hours he was there, a distance in those days, of nearly one hundred miles.”2

Israel Putnam, who held the commission of Lt. Colonel in the Eleventh Regiment of Connecticut Militia, had an active military career with Connecticut troops prior to 1775. He was one of the three leaders of the Sons of Liberty in Connecticut directing opposition to the stamp act and he was well aquainted with the resistance efforts in New England. In 1763 he led a corps of Connecticut men in Pontiac’s War. In 1762 he was in charge of a Connecticut Regiment in Havana, Cuba, and during the French and Indian War he served with Roger’s Rangers in upstate New York.

As the alarm was spread throughout Connecticut, local militia units assembled and began preparations for the march towards Boston. “The number of men who are reported in the records to have marched in the Lexington alarm was about four thousand.”1 A letter dated Wethersfield, April 23rd states, “We are all in motion here, and equipt from the town yesterday, one hundred young men, who cheerfully offered their service, twenty days provision and sixty-four rounds per man. They are all well armed and in high spirits. My brother has gone with them and others of the first property. Our neighboring towns are all arming and moving. Men of the first character shoulder their arms and march off for the field of action. We shall by night have several thousands from this Colony on their march…We fix on our standards and drums the Colony arms, with the motto “qui transtulit sustinet,” round it in letters of gold, which we construe thus: “God, who transplanted us hither, will support us.”1 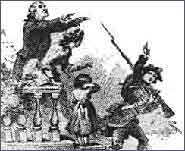 At Cambridge, MA, Israel Putnam attended a Council of War on April 21st. “Finding the British confined to Boston, and invested with a sufficient force to watch their movements, and being especially requested by the Legislature of Connecticut, then in session, to meet them for the purpose of consultation, he returned at once to Hartford. Having assisted in levying and organizing a regiment, under authority of the Legislature, by whom he was promoted to be Brigadier General, he hastened back to Cambridge, from which place he was absent only one week, leaving orders for the troops to follow as speedily as possible. Among those troops, Knowlton, Durkee, and many others, who had served with him in the French and Indian Wars, were foremost to enlist under the banner of so able and tried a commander.”2 Jedediah Huntington describes the situation at Cambridge as, “General Ward is at Roxbury. General Putnam is Commander-in Chief at this place. They have both of them too much business upon their hands.”2 A British soldier states, “The whole country is in arms against us, and they are headed by two of the Generals that headed our army in the last war. – Their names are Ward and Putnam.”2

“April and May were full of false alarms, emphasizing the lack of leadership on both sides; the Committee of Safety put the Province’s militia on full alert and ordered drafts from local units to reinforce Ward. Major General Israel Putnam had an answer to the boredom which inspired many of these alerts – he had his Connecticut men build three forts, two protecting the much dismantled (and only) bridge over the Charles River, and the other blocking the roads into Cambridge from Charlestown Neck and Lechmere Point. On 13 May he marched almost 3000 men onto Breed’s Hill, where they drilled before marching into Charlestown to taunt the crew of the H.M.S. Somerset, anchored in the ferryway between Charlestown and Boston with its guns loaded, waiting for the Americans to fire.”3 On June 12th the British General Gage declared martial law. General Gage’s plan to occupy ground immediately surrounding Boston reached the Committee of Safety on June 15th. It was then resolved to fortify Bunker Hill.

“On the evening of June 16, 1775, a body of one thousand men from the Massachusetts and Connecticut regiments around Cambridge, under the immediate command of Col. Prescott, was ordered to Charlestown Neck to fortify Bunker’s (Breed’s) Hill. Of this number two hundred were from Conn. under the command of Capt. Knowlton, the detachment being made up of details of one subaltern officer and about thirty men from companies in Putnam’s and Spencer’s regiments…. Putnam’s own company was represented by Lt. Grosvenor and thirty men. “1 “Among the Connecticut officers mentioned as present in the action were Gen. Putnam, in general command.”1 Putnam was instrumental in the change of plans to fortify Breed’s Hill. The redoubt was completed during that night to the amazement of the British the following morning.

On June 17th the British made several frontal attacks on the Patriot redoubt. “Putnam…was everywhere among his men on the hill, commanding, pleading, cursing and swearing like a madman, in his determination to rally and hold steady his green, embattled troops. When his men ran out of ammunition they fought the British bayonets with clubbed muskets, frail militia swords, and even rocks snatched up from the rough ground where they stood.”4 “Putnam, though the balls fell around him like hail, was wholly insensible of danger. Coming to one of the deserted field-pieces, he dismounted, took his stand by its side, and seemed resolved to brave the foe alone. One sergeant only dared to stand by him in this perilous position. He was soon shot down, and the General himself retired only when the British bayonets were close upon him, and he was in imminent danger of being made a prisoner. It is in this attitude of protecting the rear of our retreating troops, that General Putnam is represented by Trumbull, in his celebrated picture of this great battle. His figure is conspicuous, dressed in a light blue and scarlet uniform, with his head uncovered, and his sword waving towards the enemy, as if to arrest their impetuous pursuit, or defy their further advance.”2

When the Patriots ran out of powder, the British stormed the redoubt forcing the retreat of the colonists from Charlestown, with Connecticut losses at 14 killed and 30 wounded. Having experienced the heavy Patriot resistance and unacceptable losses estimated at 1500 killed or wounded out of 3000 troops engaged, the British remained confined to Boston until their evacuation in 1776.

Putnam’s regiment remained in Cambridge supporting the siege of Boston until enlistment’s expired in December of 1775. Due to the shortage of muskets, “On 9 December 1775 the Connecticut men were paraded to confiscate the weapons of those not re-enlisting.”3 In 1776 Putnam’s regiment was reorganized into the 20th Continental regiment under Colonel Durkee of Norwich, CT.