The Scarlet Standard No.2

Historical Series, Number Two, August 1997
The Educational Outreach of the General Israel Putnam Branch No. 4
of the Connecticut Society of the Sons of the American Revolution

He…”Dared To Lead Where Any Dared To Follow”
Tombstone Epitaph to General Israel Putnam by The Reverend Timothy Dwight, Chaplain attached to Putnam’s Command and Chaplain to Parson’s Brigade, later President of Yale College 1795-1817.

In 1775, the standards of all Connecticut Regiments were of the same design, but of different colors. Wooster’s was to be yellow, Spencer’s blue, Putnam’s scarlet, Hinman’s crimson, Waterbury’s white, Parson’s azure, Webb’s blue (?), and Huntington’s orange. On Prospect Hill in Somerville, the strongest work in the siege line around Boston, General Putnam raised his scarlet standard, bearing on one side the Connecticut shield with its motto, “Qui Transtulit Sustinet” (He Who Transplanted Still Sustains). As to the origin of the motto, the former State Librarian and compiler of the Public Records of the State of Connecticut, Charles J. Hoadly, suggested in 1889 that we look to the 80th Psalm: “Thou hast brought a vine out of Egypt: thou hast cast out the heathen, and planted it. Thou preparedst room before it, and didst cause it to take deep root, and it filled the land.” The other side of the standard bore the motto of Massachusetts, “An Appeal to Heaven” (John Locke, “Two Treatises of Government”, 2nd Treatise, 21).

The New England Chronicle for July 21, 1775 reported: “Cambridge, July 21. “On Tuesday morning the standard lately sent to General Putnam was exhibited flourishing in the air, bearing on one side this motto, “An Appeal to Heaven”, and on the other, “Qui Transtulit Sustinet”. The whole was conducted with the utmost decency, good order, and regularity, and to the universal acceptance of all present. All the Philistines on Bunker’s Hill heard the shout of the Israelites, and being very fearful, paraded themselves in battle array.”

G. H. Hollister’s “The History of Connecticut” published in two volumes at Hartford in 1857 gives this account: “On July 20,1775, the Declaration of the Continental Congress, setting forth their reasons for taking up arms, was read to the American Troops before Boston. Putnam’s Division was paraded upon Prospect Hill to hear the Declaration. The troops shouted “Amen” three times, a signal gun was fired from the fort,…and suddenly the new standard that had just arrived from Connecticut, rose and unfurled itself…exhibiting on one side, in large golden letters, the words An Appeal to Heaven! and, on the other, the armorial bearings of Connecticut, with its simple shield unsupported and without a crest, marked with the three vines…and with the scroll, Qui Transtulit Sustinet”.

No original of Putnam’s standard survives, however, a replica of the standard as described above is dedicated and flown by our color guard in remembrance of the Connecticut troops who served under General Israel Putnam after the Lexington Alarm, at the siege of Boston and at Bunker Hill.

Prospect Hill in Charlestown became part of Somerville in 1842 and was known to the British as the “Citadel” of the American siege line around Boston. This historic hill, with its commanding view of Boston and the surrounding countryside, was an important Patriot fortification, flag and signal station during the siege of Boston. Because of its prominence, the British contemptibly referred to it as “Mount Pisga”, alluding to the Biblical account of Moses ascending “Pisgah” to view the “Promised Land” (Deuteronomy 3:27) which he was not permitted to enter (i.e. these sons of Puritans ascending Prospect Hill to view Boston, with entry denied by British Troops). The significance of this site is noted in the diary of Ensign Noah Chapin, Jr. of Spencer’s (2nd CT) Regiment: “1775. July 2 this Day about 11 o’clock Genrel Washington & Genrel Lee with several other Gentlemen arrived at Cambridge and in the afternoon they road out to the line of forts at Prospect Hill in Charlestown.” Three days later, Dr. Samuel Cooper, Pastor of Boston’s Brattle Street Church (converted into a barracks and stable by British troops), noted in his diary: “Dined with General Washington and the other gentlemen…went P.M. to the lines of Prospect Hill. Saw the encampment of British Troops on Bunkers Hill.” Eight months later, Cannons captured at Fort Ticonderoga were mounted on Dorchester Heights forcing the British from Boston (Evacuation Day: March 17, 1776). Back in Boston, Dr. Cooper preached a Sermon at First Church on Sunday April 7, “A Place for My People Israel” (2 Samuel 7:10), rejoicing “Heaven has put an Hook in their Nose and a Bridle in their Mouth and turned them back ashamed” (Isaiah 37:29). 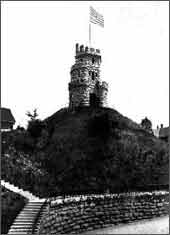 In 1903, the City of Somerville dedicated a granite Memorial Flag Tower and Observatory atop Prospect Hill (Prospect Hill Ave. off McGrath Hwy) with a five paneled bronze tablet affixed to the front retaining wall. The second panel read: “Here on July 18, 1775 Was Raised Amid Great Rejoicing the Flag Presented to General Putnam and His Heroic Soldiers Bearing the Motto of Connecticut “Qui Transtulit Sustinet” and of Massachusetts “An Appeal to Heaven.” The singular importance of the 3rd CT Regimental colors is noted in the detailed camp diary of Paul Lunt, 1st Lt. of Ezra Lunt’s Company, Little’s 17th Mass. Regt., stationed at Prospect Hill: “1775, July 18. This morning a manifesto from the Grand Continental Congress was read by the Rev. Mr. Leonard, Chaplain to the Connecticut forces, upon Prospect Hill in Charlestown to those troops encamped upon and near said hill. Our standard (3rd CT) was presented in the midst of the regiments with this inscription upon it: “Appeal to Heaven”…Tuesday August 1, 1775…raised the mast that came out of the schooner that was burnt at Chelsea, for to hoist our flag upon, in the fort upon Prospect Hill in Charlestown, seventy-six feet high”. Among General Gage’s papers was a letter from a tory within the American camp which states: “but of all seens that ever happen’d not long since our people got a famous New large Standard, Got upon the Hill Doctor Leanard made amost Solemn prayer over the Standard Genll Putnam pulled off his hat, gave the Signal for three Chears which was given, Cleargeman and all of us huzzard at once, then the Indeans gave the war hoop and to conclud, of went Cannon, Major, that was worth you seeing”. Some small flags such as the Bedford flag were in use by minuteman companies and a red flag with the words “Come! If You Dare!” may have flown at the battle of Bunker Hill, but with the exception of Connecticut’s 3rd, regimental colors were not in use during the siege of Boston. The Pennsylvania Riflemen who were stationed around Prospect Hill, would not have regimental colors before the British evacuation.

Connecticut appears to be the only Colony making specific provisions for regimental standards during the siege of Boston, when in May 1775 the General Assembly provided for a “standard for each of its six regiments, with that of the 3d being “scarlet”. Although no original flag for the 3rd Regiment remains, there is an existing standard for the 2nd Battalion, 2nd Regiment. While the exact date of use for this standard is uncertain, its style and lettering is typical of the period and is considered to be a Revolutionary-era flag. The fabric is red silk, with the State Seal, motto and regimental identity painted in gold. Originally measuring at least 36 x 48 inches, the flag has been restored, frame mounted, and since 1846, among the holdings of the Connecticut Historical Society. Traditionally, the flag was deposited in the State Arsenal by Colonel John Mix of Farmington, sometime after 1812. Colonel Mix was Adjutant of the Second Connecticut Regiment of 1777 from 1778 to 1781 and Connecticut’s Quartermaster-General from 1796-1814. This standard is particularly interesting for its lettering “Raised 1640” declaring its spiritual connection to the troops raised by the English Parliament against the King in the “Good Old Cause” of 1640; a theme repeated in the standard of Webb’s Additional Continental Regiment of 1777. Our English Puritan heritage was alive at the time of the Revolutionary War as seen in the symbolism of our mottos and flags; the naming of

Connecticut’s twenty gun Warship, the Oliver Cromwell, flying our early state flag with thirteen stripes (captured by the British in 1779, she was contemptibly renamed “Restoration”); the preponderance and success of the New England Puritan Sermon phenomena, delivering over two thousand discourses a week to the Colonists; the prominent role of Chaplains among the troops; and Ben Franklin’s proposed motto for the Great Seal of the U.S., “Rebellion to Tyrants is Obedience to God”, attributed to John Bradshaw (1602-59) Chief of the Regicides, as inscribed on a cannon marking his gravesite.

On January 1, 1776, the Grand Union flag was first raised at Prospect Hill “in compliment to the United Colonies”. It was later flown over some American fortifications and ships, but after the Declaration of Independence, it became inappropriate and often improvised. On June 14, 1777, the Continental Congress established a National Flag: “Resolved, That the flag of the thirteen United States be thirteen stripes, alternate red and white: that the union be thirteen stars, white in a blue field, representing a new constellation”. Rev. Ezra Stiles, President of Yale College, noted in his diary July 9, 1777: “The Congress have substituted a new Constelln of 13 Stars in the Continental Colors”. John Adams, chairman of the Board of War in 1777, may have proposed the circular constellation of the lyre of Orpheus (an Adams heirloom Seal), of thirteen stars representing union in endless duration. Variations of 13 star patterns were made, but the drawing of the first flag of the United States, in the State Department, has the thirteen stars in a circle.