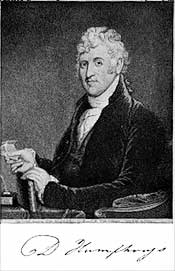 David Humphreys was born in Derby, Connecticut, the son of the Reverend Daniel Humphreys and Sarah Riggs Bowers Humphreys. He earned his Bachelor of Arts degree at Yale University in 1771 and a Masters degree in 1774. He taught school briefly from 1771 to 1773 in Wethersfield, Connecticut and then became a tutor in New York from 1773 to 1776. With the outbreak of the Revolution, David Humphreys joined a New York Militia regiment in 1776, and later rose in the 6th Connecticut Regiment to the rank of Brigade Major. He successively became an aide to General Putnam (in 1778), General Nathaniel Greene (in 1780), and General George Washington (from June of 1780 to the end of the hostilities), attaining the rank of Lieutenant Colonel.

In 1784, Humphreys was appointed by Congress as Secretary of the committee designated to negotiate commercial treaties in Europe, working chiefly under Jefferson. Humphreys’ conservative (Federalist) political convictions had not yet fully formed, and he and Jefferson were friends until a falling out in 1801, when the third president recalled him from his post overseas, thus ending his diplomatic career. In 1786, he was back in Connecticut as a member of the State’s General Assembly. He was then made Colonel of a United States detachment to suppress Shays’s Rebellion in 1787. He spent long periods of time with the Washington’s at their Mount Vernon estate where he was a trusted advisor and confidant of President Washington. In 1791, he was named the first United States Minister to Portugal. In 1796, he was made Minister to Spain, where he developed an interest in sheep breeding, and he eventually introduced the Merino breed into Connecticut, drastically improving the American production of quality wool. In 1797, he married Ann Francis Bulkeley, the daughter of an Englishman who did business in Lisbon, Portugal.

After 1801 and his replacement by Jefferson, Humphreys, now back in his native Connecticut, had the satisfaction of seeing his own woolen and cotton mills thrive. As he grew older, honors came to him from Brown University, Dartmouth College, and through membership in the British Royal Society. He was commissioned a brigadier general in the Connecticut militia in reaction to the War of 1812. When he died at New Haven he was a respected and successful citizen, merchant, and writer.

The events of David Humphreys’ life did not make him a traditional hero of the American Revolution nor did they place him in the limelight. He was content to work hard in the background of the emerging Republic as an advisor, a negotiator, and a principled and devoted servant to the principles of Democracy and free enterprise. General David Humphreys was a man who believed in the ideals of freedom, a man who worked behind the scenes, for the most part, to promote and assure the highest ideals of our new nation. He demonstrated, time and again, unswerving loyalty to his superior officers and to the men who served under him. We honor him as a hard-working citizen who lived the principles of the new Republic he helped to form.