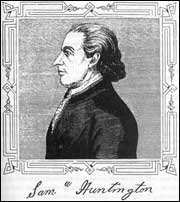 The family of Samuel Huntington was among the earlier settlers of Connecticut, who located at Saybrook. He was born at Windham, Connecticut, on the second of July, 1732. His father was an industrious farmer, and the only education he was able to allow his son, was that to be derived from the common schools in his neighborhood. Samuel was very studious, and the active energies of his mind surmounted many obstacles that stood in the way of intellectual advancement.

He acquired a tolerable knowledge of the Latin language, and at the age of twenty-two years he commenced the study of law. Like Sherman he was obliged to pursue it with borrowed books and without an instructor. He succeeded, however, in mastering its difficulties, and in obtaining a good practice in his native town, before he was thirty years of age. At the age of twenty-eight (c.1760) he removed to Norwich, where be had greater scope for his talents.

Mr. Huntington was elected to the General Assembly of Connecticut in 1764, and the next year he was chosen a member of the Council. In the various duties of official station he always maintained the entire confidence and esteem of his constituents.

He was appointed Associate Judge of the Superior Court in 1774; and in 1775 he was appointed one of the delegates from Connecticut, in the General Congress. The following year he had the glorious privilege of voting for, and signing, the Declaration of Independence. He was a member of the Congress nearly five consecutive years, and was esteemed as one of the most active men there. His integrity and patriotism were stern and unbending; and so conspicuous became his sound judgment and untiring industry, that in 1779 he was appointed President of Congress, then the highest office in the nation. 1 At length his impaired health demanded his resignation of the office, (c. 1781) yet it was with great reluctance that Congress consented to dispense with his services.

On his return to Connecticut he resumed the duties of the offices he held in the Council and on the Bench, both of which had been continued while he was in Congress. He again took his seat in Congress in 1783, but left it again in November of that year, and retired to his family. Soon after his return, be was appointed Chief Justice of the Superior Court of his State (c. 1784). In 1785 he was elected Lieutenant Governor, and was promoted to the Chief Magistracy in 1786, which office he held until his death, which occurred at Norwich, on the fifth day of January, 1796, in the sixty-fourth year of his age.

Governor Huntington lived the life of the irreproachable and sincere Christian, and those who knew him most intimately, loved him the most affectionately. He was a thoughtful man, and talked but little – the expression of his mind and heart was put forth in his actions. He seemed to have a natural timidity, or modesty, which some mistook for the reserve of haughtiness, yet with those with whom he was familiar, he was free and winning in his manners. Investigation was a prominent characteristic of his mind, and when this faculty led him to a conclusion, it was difficult to turn him from the path of his determination. Hence as a devoted Christian and a true patriot, be never swerved from duty, or looked back after he had placed his hand to the work. The cultivation of this faculty of decision we would earnestly recommend to youth, for it is the strong arm that will lead them safely through many difficulties, and win for them that sentiment of reliance in the minds of others, which is so essential in securing their esteem and confidence. It was this most important faculty which constituted the chief aid to Samuel Huntington in his progress from the humble calling of a ploughboy, to the acme of official station, where true greatness was essential, and to which none but the truly good could aspire.

1 – He was appointed to succeed John Jay, who was sent as Minister Plenipotentiary to Spain, to negotiate a treaty of amity and commerce with that nation.