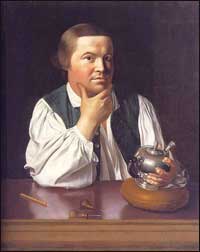 Paul Revere, the folk hero of the American Revolution whose dramatic horseback ride on the night of April 18, 1775 warning Boston-area residents that the British were coming, was immortalized in a ballad by Henry Wadsworth Longfellow. Revere was mainly distinguished in the colonial era as a master silversmith — a craft he learned from his father, Apollos Rivoire, a Huguenot refugee who changed his name to Revere in the New World. To support his large family, the versatile and energetic craftsman also made surgical instruments, sold spectacles, replaced missing teeth, and engraved copper plates, the most famous of which portrayed his version of the Boston Massacre.

In the 1770s Revere immersed himself in the movement toward political independence from Great Britain. As the acknowledged leader of Boston’s mechanic class, he proved an invaluable link between artisan and intellectual. In 1773 he donned Indian garb and joined 50 other patriots in the Boston Tea Party protest against parliamentary taxation without representation. Although many have questioned the historical liberties taken in Longfellow’s narrative poem, Paul Revere’s Ride (1863), the fact is that the legendary figure served for years as the principal rider for Boston’s Committee of Safety, making journeys to New York and Philadelphia in its service. On April 16, 1775, he rode to nearby Concord to urge the patriots to move their military stores endangered by pending British troop movements. Finally, two days later, he set out on his most famous journey to alert his countrymen that the redcoats were on the march, particularly in search of Revolutionary leaders John Hancock and Samuel Adams. Because of his warning, the Minutemen were ready the next morning on Lexington green for the historic battle that launched the War of Independence.

With the outbreak of hostilities, Revere turned industrialist and constructed a much-needed powder mill to supply colonial arms. In 1776 he was put in command of Boston Harbor’s principal defense at Castle William, but his war record as a lieutenant colonel was largely undistinguished. He resumed his stride as a successful industrialist after the war, however, and set up a rolling mill for the manufacture of sheet copper at Canton, Massachusetts. From this factory came sheathing for many U.S. ships, including the USS Constitution, and for the dome of the Massachusetts statehouse. Two famous Revere portraits by J.S. Copley and Gilbert Stuart hang in the Boston Museum of Fine Arts which also houses the finest collection of Paul Revere’s silver.

The picture is a reproduction of Paul Revere by John Singleton Copley, Gift of Joseph W. Revere, William B. Revere, and Edward H.R Revere. Courtesy, Museum of Fine Arts, Boston.