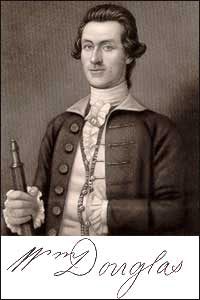 William Douglas, of Northford, Connecticut (1742-1777), Captain of the 6th company of the 1st Connecticut regiment, General Wooster’s, 1775, which marched to New York in the latter part of June and encamped at Harlem. About September 28th it marched to the Northern department, and took part in the operations along Lakes George and Champlain, assisted in the reduction of St. John’s in October, and afterward was stationed in part at Montreal.

Early in 1776 he was Major in Colonel Ward’s regiment, ordered to New York, and June 20th he was commissioned Colonel of the 5th battalion, Wadsworth’s brigade. This battalion served on the right of the line of works during the battle of Long Island, August 27th, and was in the retreat to New York, August 29-30. Colonel Douglas commanded a brigade at Kip’s bay on the East River at the time of the enemy’s attack, September 15th. He also participated with his regiment in the battle of White Plains, October 28th.

January 1, 1777, he was commissioned Colonel of the 6th regiment, Connecticut line, and he died from the effects of previous service, May 28, 1777.