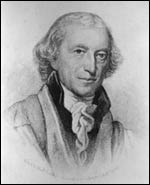 A lawyer who initiated new professional standards in legal practice. Johnson was graduated from Yale College in 1744. His father, Samuel Johnson (1696-1772), was a noted Anglican clergyman who served as the first president of King’s College, later Columbia. The son, choosing law as a career, quickly enjoyed great success, attracting clients from a large area. Entering politics early, he won election in 1761 as a deputy to the assembly, and in 1766 he was elected to the upper house, the first Anglican to enjoy such an honor. A man of great wealth, he enjoyed substantial landholdings and judicious investments, including an interest in iron mining and manufacturing in the Kent-New Milford area. From 1767 to 1771 he ably represented Connecticut as special agent in the complex Mohegan case, in which he defended Connecticut’s rights to Mohegan lands in eastern Connecticut. His masterful presentation of Connecticut’s case before the Lords of the Council was so persuasive that they reaffirmed a 1743 decision which was favorable to Connecticut. While in England he also served unofficially as agent for the Susquehannah Company. His sophisticated and genial personality and ability to inspire confidence won him many friends in England.

As tensions between England and the American colonies deepened, Johnson, considering himself a moderate. Whig, opposed all of the major regulatory and taxing acts of Parliament but was dismayed by the prospect of the colonies separating from The British Empire. In 1765 he was willing to serve as a delegate to the Stamp Act Congress, but in 1774 he declined to serve in the First Continental Congress and after the outbreak of war he withdrew from the upper house. Refusing to take the required oath of allegiance to Connecticut’s revolutionary and independent government, in November 1777 he had to relinquish his legal practice.

In 1779 Johnson was arrested for agreeing to mediate with British General William Tryon, a former friend, for the safety of his home town of Stratford. Appearing before the Council of Safety, he advised them that the idea was not his and that he had not executed it. After he took an oath of fidelity to the state, he was permitted to return to his home and family.

After peace came in 1783 he made one of the greatest political comebacks in Connecticut’s history. He was chosen an assistant; Connecticut’s counsel in the settlement of the Susquehannah land dispute; delegate to Congress; member of the Connecticut delegation to the Constitutional Convention of 1787 and the Connecticut ratifying convention of 1788; and United States senator. As the first president of Columbia College, he served with distinction from 1787 to 1800. As a framer of the Federal Constitution, he rendered his greatest service to his state and country by advocating the compromise which broke the deadlock over representation. If his life had a consistent theme, it was conciliation, which he practiced with consummate success.